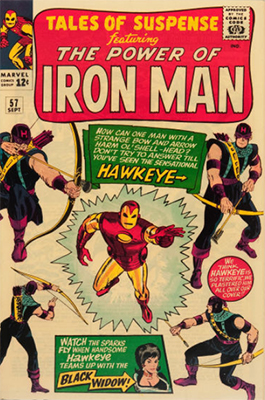 Why Tales of Suspense 57 is a Key Issue Comic

Black Widow certainly has a way with men, coaxing them into nearly anything she wanted. The same applies to one of her first lovers, Hawkeye!

Born Clint Barton, Hawkeye had a rough life, but was a very famous marksman.

His life changed when he met Black Widow while running from the police. Using her trademark seduction, Black Widow convinces Hawkeye to use his acid arrows to fight Iron Man.

When one of his arrows accidently hits Black Widow, Hawkeye rescues her and flees.

Less than a year later, Hawkeye joins the Avengers in Avengers #16, and has remained a stable member since.

Even though he has been a popular Avengers member for years, once the Avengers movies were released, Hawkeye was launched into worldwide fandom and became a household name.

Like Tales of Suspense #52 (Black Widow’s first appearance), the average ToS #57 is worth between a couple of hundred dollars and as much as $1,000.