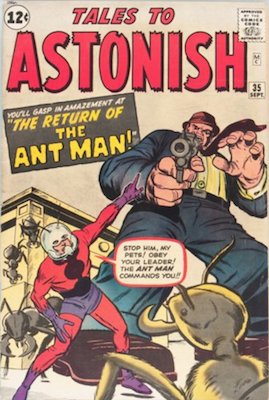 Why Tales to Astonish 35 is a Key Issue Comic

After making his debut in Tales to Astonish #27, Hank Pym is ready for another adventure, this time taking the persona of Ant-Man.

In TTA #27, Hank perfected his Pym Particles, which can shrink an object or bring it back to normal size.

As we saw in #27, Hank had a near-death experience in an ant hill, but this adventure gave him an idea – create a helmet so he could communicate with ants.

Completing his helmet and suit in Tales to Astonish #35, Hank becomes Ant-Man, controlling an army of ants to fight Communist agents who are trying to steal his top secret anti-radiation gas.

Tales to Astonish #35 was so popular, Ant-Man was featured in several more issues, until the Hulk became the main star of the series.

In 1963, Ant-Man became a founding member of the Avengers with his future wife, Wasp.

Besides Hank Pym’s first appearance in Tales to Astonish #27,  #35 is the next most valuable Ant-Man related comic.

Since the release of the highly praised Ant-Man movie in 2015, TTA #35 has been rising in value.

Why Tales to Astonish #27 is a Hot Comic