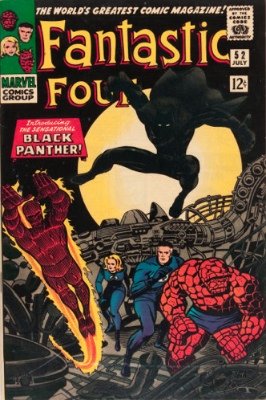 Why Fantastic Four 52 is a Key Issue Comic

Who knew that Fantastic Four #52 would be the place Marvel debuts their first black superhero?

As one of the most popular characters in Marvel history, Black Panther's legendary debut  completely changed the face of comics forever.

Testing their abilities, Black Panther individually defeats each member of the Fantastic Four, but when they join forces, they finally win against the Wakanda King.

Like their other issues, FF #52 created another major overhaul to the comic industry, and Black Panther would go on to become an Avenger and eventually star in his own (but poor-selling) series Jungle Action.

The bigger news is that Black Panther is appearing in movies in the Marvel Cinematic Universe. Already part of the Avengers franchise, T'Challa is starring in his own standalone movie early in 2018.

Demand for key issues is usually driven by TV shows and movies these days, and there has bee a spike in interest since.

With the Black Panther coming to the Marvel Cinematic Universe in a big way (making his first appearance in 2016’s Captain America: Civil War), the value of Fantastic Four #52 has reached all-time highs.

In 2018, Black Panther will receive his own movie, ensuring that FF #52 will forever be cemented as one of the most valuable comics.

If you’ve got a copy of FF #52 just gathering dust, get it professionally appraised – for free! No matter the condition, we’re interested in seeing your copy of FF #52.

Here is a guide to recent sales of this important book.

Most Expensive Comics of the 1960s