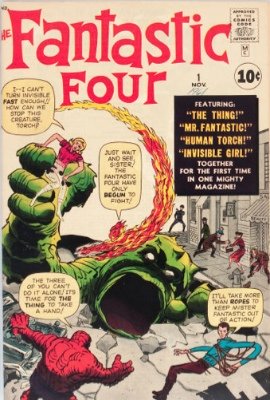 Why Fantastic Four #1 is a Key Issue Comic

Published in 1961, Fantastic Four #1 is often credited as one of the most important comics in Marvel’s history, helping usher in the “Marvel Age of Comics” and effectively placing Marvel as the top comic publisher for many years.

For the ultimate comic collector, there’s nothing quite as magical as owning the first appearance of your favorite heroes – especially the Fantastic Four!

In classic origin story form, the team narrates how they were imbued with super powers when they were blasted by cosmic rays.

(Radiation was often Stan Lee's answer to where super-powers came from. See Incredible Hulk #1 for another example.)

The Fantastic Four are most famous for battling against evil genius Doctor Doom. However, in Fantastic Four #1, we meet the team’s most enduring enemy – Mole Man.

Unlike Superman, Batman, and Spider-Man, the Fantastic Four have always had a more underground following.

As such, Fantastic Four #1 has yet to break $1 million in value, but every year, the value of this important issue gradually appreciates.

Like many comics from the Silver Age, FF #1 is prone to the dreaded Marvel Chipping (loss of color and frayed edges).

To date, only one CGC 9.6 grade Fantastic Four #1 exists, and only three CGC 9.4 have been found. Could you be sitting on an ungraded gem?

Why Fantastic Four #48 is a hot comic book