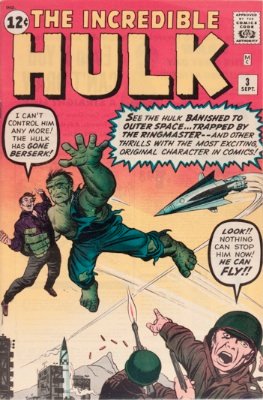 Why Incredible Hulk 3 is a Key Issue Comic

Incredible Hulk #3 features the first appearance of the Ring Master (and his Circus of Crime), and also retells Hulk’s origin story, but from Rick Jones’ point of view.

Since Incredible Hulk #1, Rick Jones has been at Hulk’s side, helping to keep him calm and the secret under control.

When Colonel Russ secretly sends Hulk into space, hoping to rid the world of him, Rick comes to his aid.

In an instant, both Rick and Hulk are bathed in radiation, which creates some kind of psychic connection between the two, while also diminishing Hulk’s intelligence.

Thanks to the radiation, Rick can now command Hulk, making it easier to keep him under control.

But Hulk #3 shows that Stan Lee and Jack Kirby had a long-term plan for expanding Hulk’s abilities, emotional range, and the other characters in the series.

With only six issues published, the entire first Incredible Hulk series from 1962 is comic collector gold.

Expanding the depth of the series, Incredible Hulk #3 may not be as valuable as the first two issues, but still commands high prices.

100 Hot Comics You Should Own