Natasha Romanov has become one of the most cherished characters in the MCU, thanks to the big screen role played by Scarlett Johansson in the Avengers movies.

The 2020 Black Widow movie will cement her still further, and is sure to increase early appearances in value.

If you've got some Silver Age or Bronze Age comics featuring the Black Widow (Especially Tales of Suspense #52 or ), then click here to have them valued FREE by Sell My Comic Books! 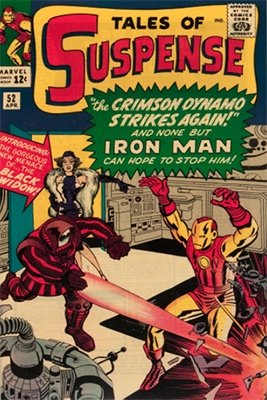 In Tales of Suspense #52, Natasha Romanoff makes her first appearance, in the Iron Man cover story. She would go on to appear in Tales of Suspense a number of times, but this first Black Widow Marvel comic has extra collector appeal.

Black Widow and another Soviet agent named Boris are sent to kill Anton Vanko, better known as the Crimson Dynamo, as well as Iron Man and Tony Stark, if necessary.

The Widow charms Tony Stark, and gets a tour of his factory, and then things get ugly. In the ensuing battles with Iron Man, Natasha escapes. 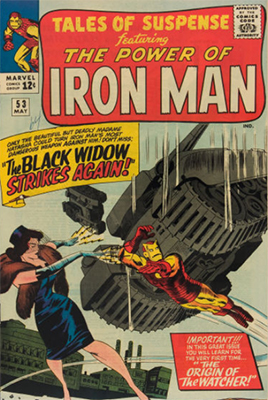 Natasha is up to it again, only an issue later, as she decides, all on her lonesome, to steal a new anti-gravity device that Tony Stark and his technical boffins have just finished with.

She charms him again, knocks him out with sleep gas, and steals the darn thing. Shenanigans ensue, and the Widow uses the device to begin sabotaging US missile bases. 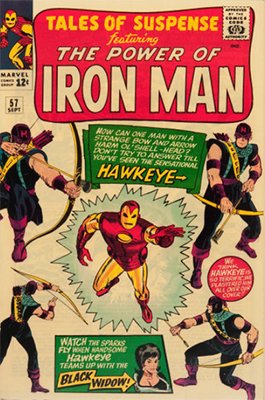 In Tales of Suspense #57, the Black Widow lives up to her femme fatale image by seducing Clint Barton, and the next thing you know, he's in her lab making some nifty new arrows to use in a fight against Iron Man.

Hawkeye and the Widow break into Stark Industries, a battle ensues, and the Widow is injured when one of Hawkeye's arrows bounces off of Iron Man's armor and stuns her.

Other early Black Widow Marvel comics include Tales of Suspense #55, #60, and #64 (First Appearance of the Widow's Bite). 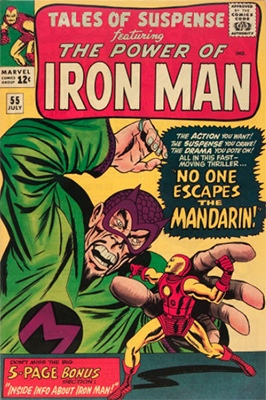 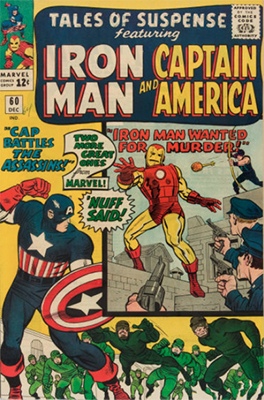 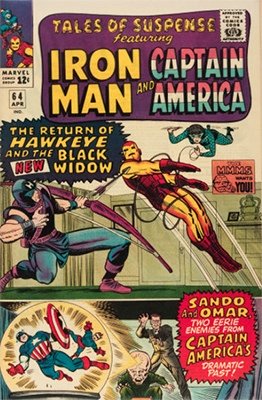 Tales of Suspense #64
First appearance of the Widow's Bite

The Avengers #29: The Black Widow Battles the Avengers 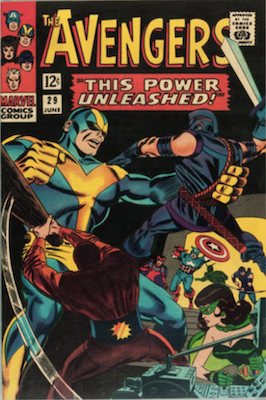 In Avengers #29, the Black Widow is kidnapped and brainwashed by her former Soviet bosses, having defected to the US.

They send her to destroy the Avengers, a task for which she recruits Power Man and the Swordsman. They subdue all the Avengers except Goliath and the Wasp, who free the captives and send the Widow and her two henchmen packing. 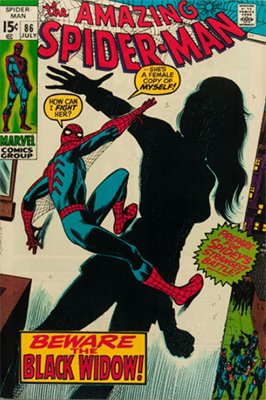 Although the cover of Amazing Spider-Man #86 shows Spidey declaiming that battling the Black Widow is like fighting a "female version of myself," luckily, the story within carries no such oddly Freudian psychosexual complications.

In fact, the Widow does not even try to charm Peter Parker in Amazing Spider Man #86, but she does decide, inspired by the wall-crawler, to design a sleek new costume for herself.

Amazing Adventures #1: The Widow Gets Her Own Series 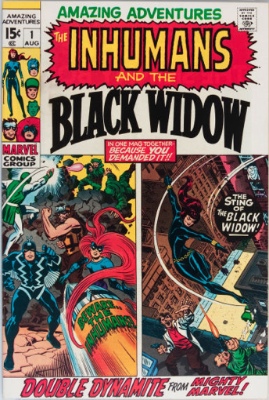 Gary Friedrich and the incomparable John Buscema (who may have been born to draw the Black Widow) bring to life the Widow's first outing in her own (almost) title.

Amazing Adventures #1 is split, as would the series until #8, between the Widow's adventures and a new Inhumans series.

The Widow story is nothing much, really, with Natasha not doing much beyond changing her costume again and fighting some small-time criminals while looking beautiful.

The dream team of Daredevil and Black Widow Marvel comics started with their first meeting in DD#81, and they teamed up in DD#92. 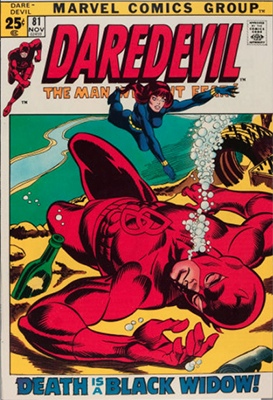 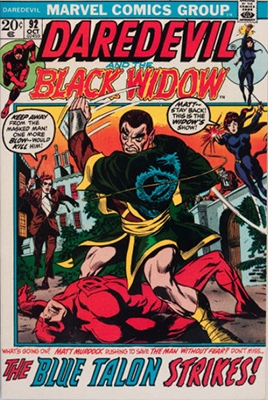 Click to read our full article on values of Daredevil Marvel Comics.

The Avengers #111: The Widow Finally Becomes an Avenger 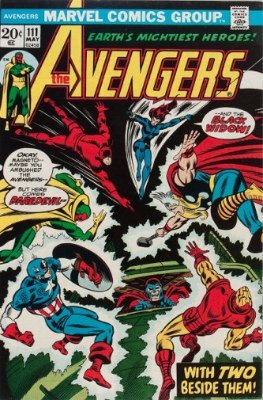 The Avengers seek the help of the Black Widow, and ask Black Widow to join officially in Avengers #111, after only 22 previous appearances in the pages of that comic.

Ironically, it would only last until #113, when Natasha goes back to Matt Murdock in Frisco.

The Champions #1: Black Widow Joins a Team of Misfits 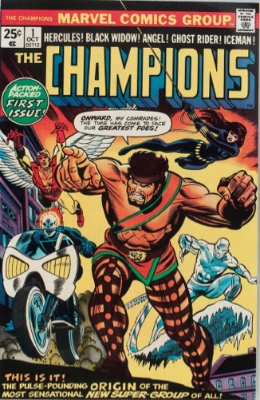 Champions #1 was a team of forgotten Marvel Comics characters, including Iceman and Black Widow. Recent speculation surrounding the Black Widow movie has seen this spike in value.

Black Widow was Hawkeye's on-and-off girlfriend in the '60s. She loved and cohabited with Daredevil in the early '70s.

She competed with the Scarlet Witch and Mantis for the title of 'Hottest Female Avenger' in the mid-'70s.

Even Ben Grimm has his mind boggled by Natasha Romanoff (now known as Natalia Romanova) in Marvel Two-In-One #10 (July 1975), when she partially disrobes in order to get at a weapon that was concealed under a fake layer of skin on her back. 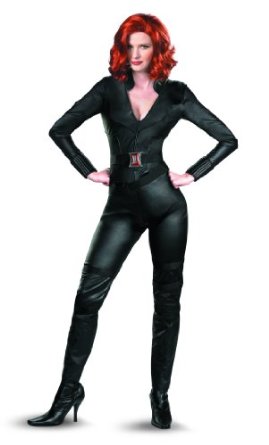 The Thing, in all his brute strength, is completely unnerved by a little Black Widow action. "Uhhh, Widder-lady? What are you DOIN'?"

She started off as a Soviet spy femme fatale with a black bouffant hairdo and a dowdy dress that didn't hide her curves, but which didn't do her any favors, either.

She battled Iron Man, seduced Hawkeye (poor Clint Barton), defected to the US, got brainwashed, got un-brainwashed, got a slinky new outfit and dyed her now-straightened hair red, and then settled down to become the ingenue who beguiled half of the Marvel superheroes at one time or another that we all know and love.

With no real superpowers (although technically, neither does Scarlett Johansson, but who cares?), the Widow is armed with an array of high-tech gadgets, primarily her "Widow's Bite," a pair of bracelets that emit an energy beam of some sort that is never very well-defined.

She is also, of course, trained as a spy and a sniper, and is an expert in several martial arts.

Ultimately, she functions as something like Ensign Chekov on Star Trek: a slice of the USSR who provides eye candy as a supporting character, while adding international intrigue.

Any storyline connected to the Cold War would eventually lead to Natasha Romanoff. And that was just how we liked it.

Of course, now she's been retconned into all sorts of powers and shenanigans, just like every other familiar character. Our scope today, luckily, will stop short of all that.

Avengers Comic Book Price Guide
Learn the values of individual issues of The Avengers comic, including #1,, #4 (reappearance of Captain America in the Silver Age).

Black Widow Movie Investment Guide
Which books should you buy to take advantage of the Black Widow movie?

Tales of Suspense #52 is a Hot Comic
See values of this hot back issue, plus our TOS #52 key issue guide.

Most Valuable Comic Books of the Silver Age (1960s)
Find out the values of the most expensive comic books of the 1960s here.