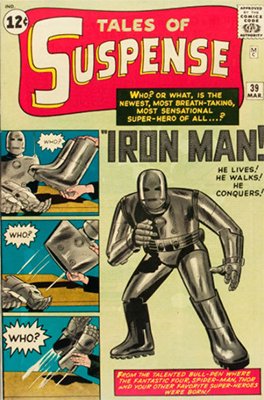 Why Tales of Suspense 39 is a Key Issue Comic

Iron Man’s first appearance in Tales of Suspense #39 is a part of comic book history.

Looking to create a superhero that was different from the rest, Stan Lee developed Iron Man to be rich, callous, selfish, and a womanizing playboy.

Donning his clunky grey MK I armor, the Iron Man of ToS #39 bears little resemblance to the Iron Man we know today, but perhaps his armor of choice was a result of his dire circumstance.

After testing out one of his weapons in Vietnam, arms inventor Tony Stark is caught in an explosion which lodges a piece of shrapnel into his chest and taken hostage.

Ordered to create weapons for the evil tyrant Wong-Chu, Tony has another idea – create a weaponized suit that would stop the shrapnel from reaching his heart and help him escape.

Also making his first appearance in Tales of Suspense #39 is Ho Yinsen, a Vietnamese inventor and mentor to Tony. We learn later that Yinsen dies in this issue.

Tales of Suspense #39 is considered one of the most important comic books of all time, and can garner huge values.

The various Avengers and Iron Man movies (starring Robert Downey Jr. as Tony Stark, aka Iron Man) have not harmed interest in the key first appearances of the major Marvel Comics characters.

The origin of Iron Man was handled really well in the first movie. While it was modernized to bring it up to date to today's movie standards, it was the same basic "man building a suit in a cave" premise from the comic book.

Even in the poorest condition, Tales of Suspense #39 can be worth good money. The record sale for this historic comic was $262,000 for a CGC 9.6 copy.

Value of Tales of Suspense Comics