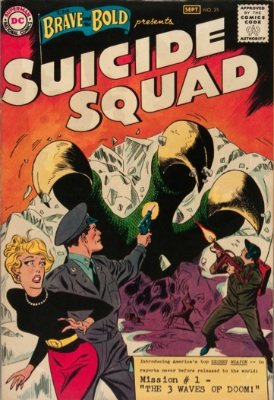 Why Brave and the Bold 25 is a Key Issue Comic

It wasn’t until the announcement of the 2016 Suicide Squad film did interest in the comic series go into a full-on craze.

For the average superhero fan, the Suicide Squad was relatively unknown, but the team has a history stretching back to 1959’s Brave and the Bold #25.

The original 1959 squad was made up of Colonel Rick Flag, Hugh Evans, Jess Bright, and Karin Grace.

Like the name suggests, they are the last-resort team to handle the most impossible situations.

It wouldn’t be until 1987 that the Suicide Squad got their solo title. To date, there have been five different Suicide Squad series, each with a huge cast of members, mostly villains.

So far, it seems that only Rick Flag is the only original member who will be featured in the film.

Guide to Brave and the Bold 25 Comic Book Values

Despite the Suicide Squad being nearly 60 years old, thanks to the movie, the team just gained a huge surge in popularity.

Perhaps DC is hoping to capitalize on an obscure team like Marvel did with Guardians of the Galaxy.

Because of its age and importance to comics, Brave and the Bold #25 is rare and valuable.

Even in the poorest of conditions, this legendary issue is worth a couple of hundred bucks!

Most valuable comic books of the Silver Age