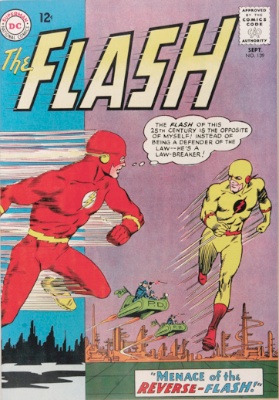 Why Flash 139 is a Key Issue Comic

Just when we thought no one could ever match the speed of the Flash, we’re proven wrong with Reverse-Flash’s first appearance in Flash #139.

Obsessing over it, Reverse-Flash finds a way to duplicate the Flash’s powers and aspires to become the greatest criminal of all time.

Wearing a nearly identical Flash uniform (except yellow instead of red), Reverse-Flash first appearance is a legendary event, and the villain is now considered the Flash’s greatest rival and archenemy.

The legacy of Reverse-Flash continues on in today’s volume of Flash comics, and we may even see him make an appearance in the upcoming Flash movie, as we did in the Flash TV show.

With Flash finally getting the exposure he deserves in DC’s Extended Universe, the value of Flash #139 has never been higher!

Now could be the time for you to capitalize on Reverse-Flash’s first appearance.

The record sale of $8,300 for one of only three copies graded CGC 9.6 would surely be beaten if one of those books were to come back on the market.

Go from Flash 139 to the DC Comic Superheroes Price Guide

Why Flash Comic #110 is a worthwhile investment