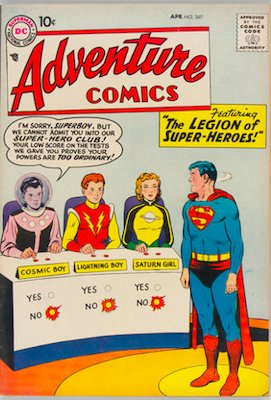 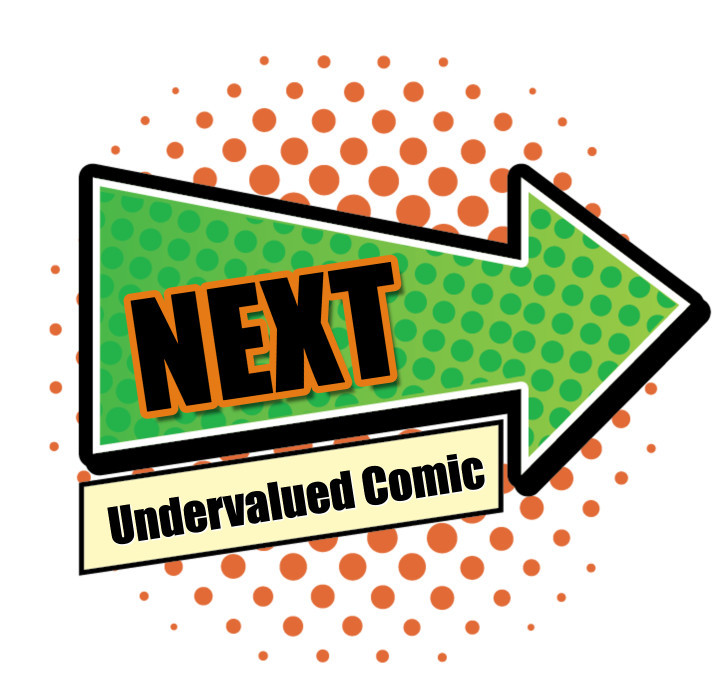 Why Adventure Comics 247 is an Undervalued Comic

It may be hard to imagine today, but there was a time when Adventure Comics #247 was the single hottest-selling book from the Silver Age.

Dig out any old, dead-tree version of the Overstreet Price Guide and you’ll see, nothing could touch it. Not Fantastic Four #1. Not even Amazing Fantasy #15. And Bronze Age books like Incredible Hulk #181? Forget it. Not even close.

Released to the world on February 27, 1958, this otherwise nondescript issue introduced to the world the Legion of Super-Heroes, including its three founding members — Cosmic Boy, Saturn Girl, and Lightning Lad — who traveled back in time from their 30th century home, hoping Superboy would consent to join the "super-hero club" they'd established there in homage to his great deeds.

But the Legion has rules. And even the great Superboy had to pass a series of initiation tests, to which the Boy of Steel readily agreed.

Unfortunately, his self-confidence was ill-placed, as Superboy proved himself a terrible disappointment. Despite his vast array of powers, at every turn he lost the race to help others in need — bested each time by a Legion member who could boast but a single super-ability.

Informed that he’d failed and would not be allowed to join the team, Superboy did not claim the tests were unfair — even though he was continually diverted from them at the worst possible moment by other, greater calamities. No, he did not pout, he did not fly into a tantrum. He simply accepted his defeat with grace and thanked the Legion for the opportunity to have applied. 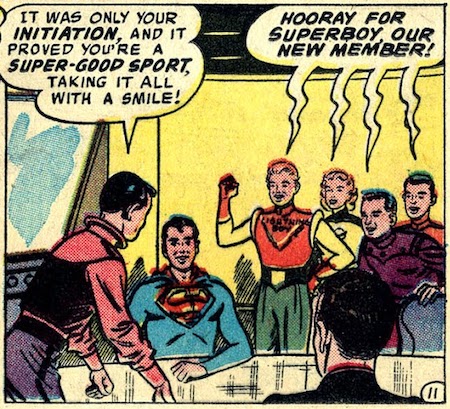 And that’s when the Legion revealed the real initiation was not a test of Superboy’s powers, but of his character — a test the "Super-Good Sport" passed with flying colors. Remember, this was the late 1950s — hazing was still seen as good, clean fun.

That simple tale was surely not created with an eye toward launching one of comicdom's most successful and enduring franchises of all time. In truth, it was just another assignment for writer Otto Binder and artist Al Plastino. Having launched the boat, neither would sail with it very far.

Likewise, editor Mort Weisinger must've seen that first Legion story as just another get-it-done plot — a means to fill Superboy's lead slot in Adventure and nothing more, the same as DC had done month-in and month-out for a dozen years to that point.

But even when they're not particularly trying to, comic book creators can sometimes capture lighting in a bottle. When the letters came pouring in demanding more, Weisinger was happy to oblige.

From 12 pages of guileless fun completely lacking in any of the teen angst we'd expect today, the Legion grew in popularity, exploding from three to 18 members and bouncing all over the Superman family of titles until, in 1962, they won a series of their very own, backing-up Superboy in Adventure, and eventually displacing him from the book entirely.

There was a brief attempt to cancel the feature when Weisinger retired in 1970, but readers wouldn't have it. They penned letters. They launched fanzines. They lobbied the nascent fan press. And DC knew the milk and honey had not yet run dry on its 30th-century super-teens. Once again the Legion got a back-up slot in support of Superboy. Once again they soon rose to co-star status. And, once again, their fame was such that they pushed Superboy right on out of his own book.

And from there the Legion only grew in popularity, until, by the early 1980s it was flaming hot. In sales and fan polls alike, the Legion ran second only to the New Teen Titans and the All-New, All-Different X-Men. And often, not by much.

Even so, nothing lasts forever. After hitting its peak in the middle of the Copper Age, the Legion began a long, slow slide down the sales charts. The series was hit hard by the Crisis on Infinite Earths, when Superboy got excised from DC continuity.

And that was the irony. Though the Legion had long since eclipsed its inspiration, without a genuine Superman-when-he-was-a-boy somewhere in the DCU, they didn't seem to matter. 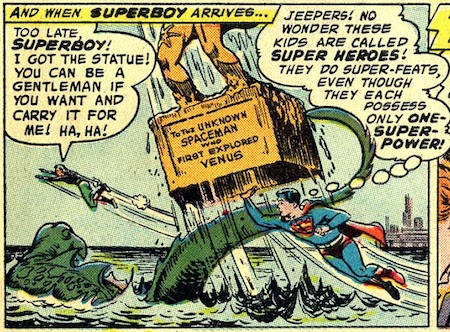 As the years wore on, DC flayed, floundered, and flip-flopped, seeking a reason for the Legion to exist. It conducted three distinct hard reboots of Legion continuity. It tried at least four soft-boot changes in direction. All trying in vain to regain that intangible sometime lost along the way. Each restart had its fans, just never as many as DC wanted or needed at that moment in time.

Today DC doesn't bother to publish a regular Legion comic at all, and the many hundreds of characters the series spawned, from Brainiac 5 to Porcupine Pete, languish in varying degrees of obscurity.

We know current publishing trends tend to drive back issue sales. So, it can't be a surprise that Adventure Comics 247 long ago pulled over into he investment vehicle slow lane, never actually going down in value, but overtaken in its languid growth by other flavors, other fads.

What was once the most expensive book of the Silver Age still trades at five figures in anything above 7.0, but it's long since been eclipsed on the sales charts by dozens of other key issues from the era. 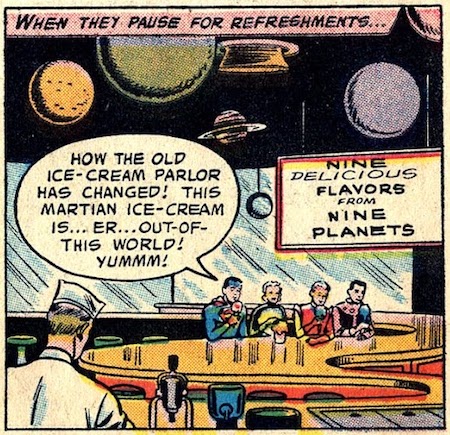 However, a sea change can roll in at any time. Consider, when the Legion was at its zenith, vying with mutants and sidekicks alike for sales supremacy, those latter two franchises had only recently been resurrected — dead IP brought back to life by a new creative team, with a fresh, new direction.

Could yet one more attempt to turn-it-off and turn-it-back-on-again do the trick? The Legion is bound to come back eventually. It is alive in the normie consciousness after all.

Its characters have appeared on CW shows Smallville and Supergirl, they had their own cartoon show for two seasons on the Kids WB, and a new animated movie from Warner Bros. Home Entertainment is due out on disc and streaming Feb. 7, 2023. And while the most recent print iteration helmed by super-star comics writer Brian Michael Bendis did not work out, a Bendis-helmed animated series is reportedly still in the works.

Most fans will tell you it was Showcase #4, but others will argue with equal assurances that it was Detective Comics #225, or Fantastic Four #1.

However, recent scholarship suggests there is rarely a single point of origin when publishing trends shift. Like geological epochs, comic book ages tend to have early and late periods. And thus, the panelologists say, Showcase #4, with its introduction of an updated Flash, was only the first first book of the Early Silver Age.

Yes, it kicked off a new heroic era, but that kick was not the explosive punt over the goalposts that was the first appearance of Superman. Barry Allen aside, Showcase #4 was, in tone and style, still very much a Uranium Age comic. And It did not spawn an immediate flood of imitators.

The change it wrought come in like a glacier. People today forget, but it took DC three years to try it again, with Green Lantern. 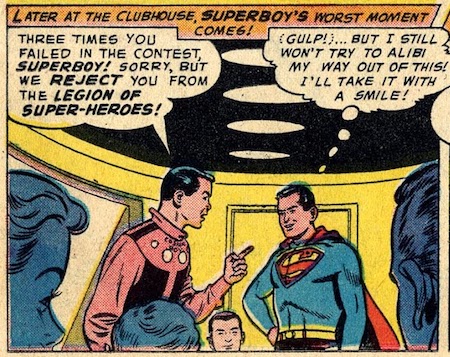 And by then the Legion had already made its debut. The fans who hold to the early-, middle-, and late-period division for the Silver Age say that what really made the era possible was the sudden explosion of the Superman mythos starting 1958.

And the Legion was at the forefront of that. For that reason, these revisionists say, it is Adventure Comics 247 that is the true first comic book of the Silver Age proper.

Maybe you buy that. Maybe you only. But there’s no denying, Adventure Comics 247 is vitally important to comic book history. As such, a price correction is long overdue.

If not for any of the reasons above, there's this: while the book is not ultra-rare, the CGC census records just 431 Universal graded copies. Add in qualified grades (8), restored books (75), and those on the signature series (6), and we still just barely cross the psychologically significant 500-copy mark.

What's more, of the 431 books granted a Universal label, CGC has graded just five at 9.0 or better. Below that, a mere seven copies have been certified in the Very Fine range, 8.0 to 8.5.

Two reasons: For one, as a remnant of this book's once-lofty status, it goes for five figures in grades all the way down to 7.5. That makes it a very good place to park your cash, should you feel yourself under inflationary pressure, as most of us now are.

After all, keep in mind, Adventure Comics 247 has never lost value. It just hasn't grown as fast as some other books in recent years. But it remains important enough, and, in higher grades, rare enough, that even if you drop $10,000 on it, you should still be able to sell it for that much in a few years, even if the cash buying power of that $10,000 should drop.

Tangible assets like art and collectibles are almost always safe havens in uncertain economic times.   But more to the point of short-term gains, Adventure Comics #247 shows the classic signs of a book trying to find a new level. All the way up and down the grading chart we see copies in one grade selling for more than those in a better grade.

But don't take our word for it, check the charts for yourself: