The Legion of Superheroes, a group of heroes from the 30th and 31st centuries, have appeared in the DC Comics universe since the late 1950s.

While they have not yet appeared in Superhero movies, they did spawn an animated series that aired on The CW network in 2006.

With the long-awaited Justice League of America movie, is a Legion movie far behind? A diverse cast of characters and a rich history to pull from, a LSH movie would make the value of its comic books rocket.

Here are key books from the history of the LSH. If you have any of them, please have them valued for free by Sell My Comic Books.

Adventure Comics #247: First Appearance of the Legion of Superheroes

Adventure Comics #247
1st Appearance of the Legion of Super-Heroes

The Legion first appeared in Adventure Comics #247 in 1958 when three of its members, Lightning Boy, Saturn Girl, and Cosmic Boy, met the modern day Superboy to recruit him into their group.

Though we only met three members of the LSH in their first appearance, their ranks would soon include such members as Brainiac 5, Triplicate Girl, Invisible Kid, and Sun Boy. 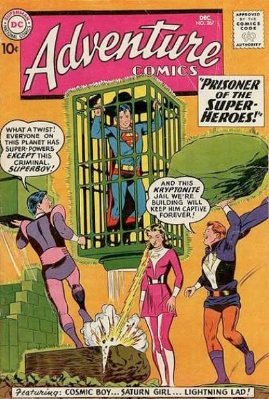 The Legion proved very popular with comic book fans. They made a second appearance in the DC Comics universe in 1959 in Adventure Comics #267.

In this story, Lightning Boy made a return appearance, though his name had been changed to Lightning Lad.

Though not as popular as their first appearance, this LSH appearance has made Adventure Comics #267 valuable.

Adventure Comics #300: Superboy in Tales of the Legion 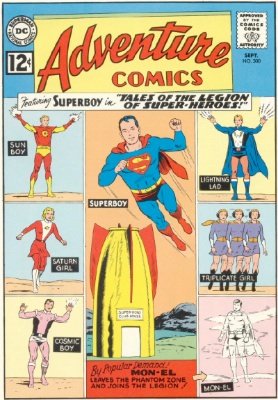 Adventure Comics #300
1st Superboy and the Legion of Super-Heroes

The LSH would make several more appearances in various DC Comics titles, including Action Comics. Finally, in Adventure Comics #300, they finally received their own feature, titled Superboy in Tales of the Legion of Superheroes.

In this story, Lightning Lad, Sun Boy, and others are about to be exiled from their Earth due to the difficulties they're having with their powers when Superboy arrives to help them. 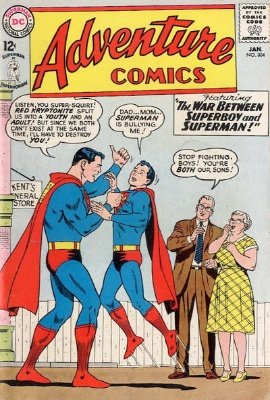 In Adventure Comics #304, Lightning Lad, one of the most popular Legion members.

He met his apparent demise after sacrificing his life to save Saturn Girl, who had a premonition of a member's death.

He was subsequently brought back to life Adventure Comics #312. 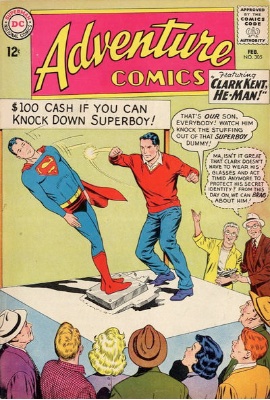 In Adventure Comics #305, Marvel Lad becomes a member of the Legion after he passes all of the membership tests and requirements.

He is ultimately revealed to be Superboy. 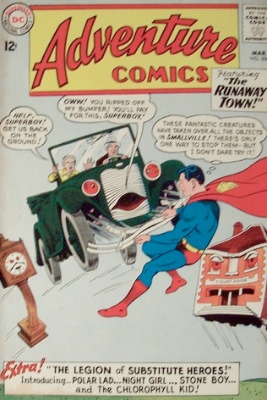 Adventure Comics #306 saw the introduction of the Legion of Substitute Heroes.

This band of five heroes — Fire Lad, Polar Boy, Night Girl, Chlorophyll Kid, and Stone Boy — were rejected for membership in the LSH and decide to form their own team. 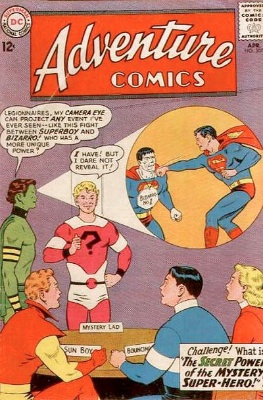 Mystery Lad joined the Legion in Adventure Comics #307 and helped them to defeat Roxxas, a menacing space pirate.

Later, Mystery Lad—who earned his name from Legion members because no one knew what his power was—changed his name to Element Lad. 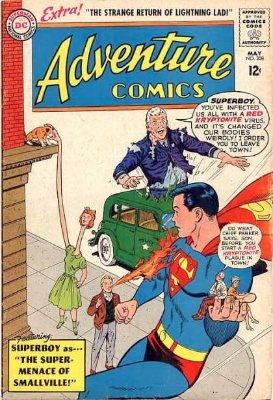 In an unusual story, Lightning Lad appears to return to the land of the living in Adventure Comics #308.

However, the Legion of Superheroes finds out that it's only his twin sister, Lightning Lass. 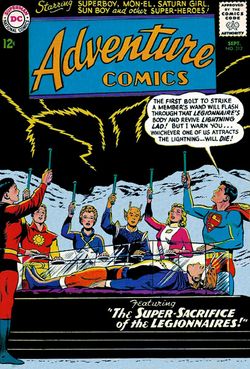 Proty, the pet of Legionnaire Chameleon Boy, sacrifices his life to revive the dead LSH member in a lightning ceremony. 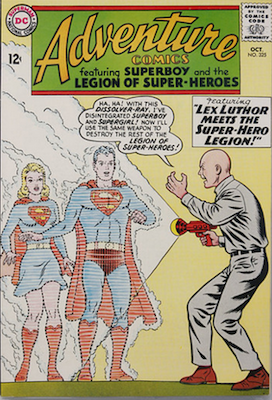 He attempts to dissolve the Legion, but is foiled by the LSH itself. 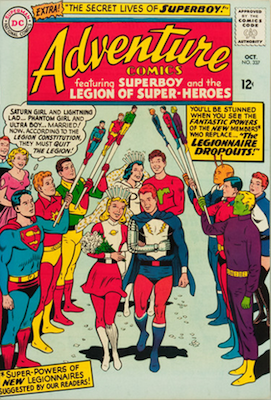 Both couples leave the Legion of Superheroes as part of the Legion's rules prohibiting married heroes, only to return and reveal that they weren't married after all.

It was all a ruse to trick three villains who tried to join the Legion.

Published in 1973, the four-issue series Legion of Superheroes is a reprint of the previous Legion stories from Adventure Comics. 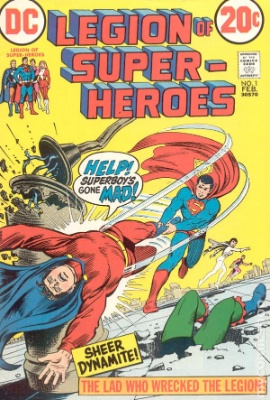 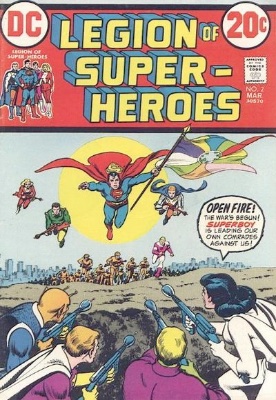 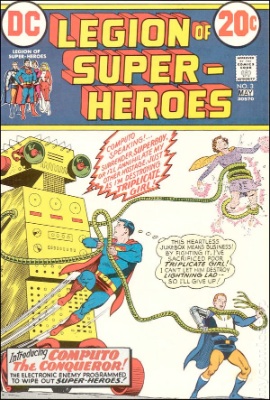 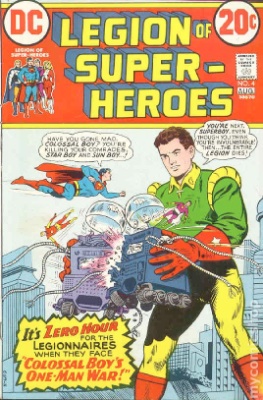 This is the first series titled after the LSH and is considered valuable to many comic book collectors, who may not be able to find (or afford) the original comics. 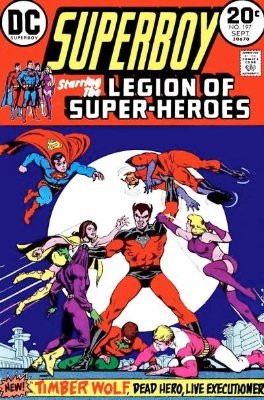 Eventually the Legion moved from the Adventure Comics series to Action Comics for approximately a year, before joining Superboy's comic book.

Superboy #197, published in 1973, marked the return of top billing on a book for the superhero team.

In this issue, Timber Wolf, possessed by supervillain Tyr, attempts to assassinate the president of Earth but is stopped by Superboy and Superman. 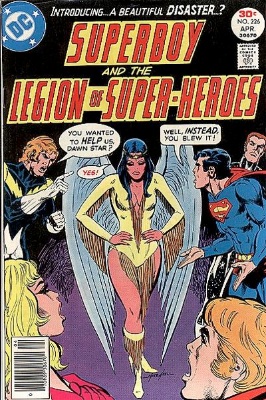 Dawnstar, one of the more popular LSH members, debuted in Superboy #226, when she is recruited by Wildfire to join the group. In this issue, she helps them to track down a band of space pirates.

Interestingly enough, in 1980 Superboy departed the comic book series and it was renamed Legion of Superheroes starting with issue #259.

We'll value your copy of Superboy and the LSH #226 if you would like. Click here to send us photos (front and back covers please). 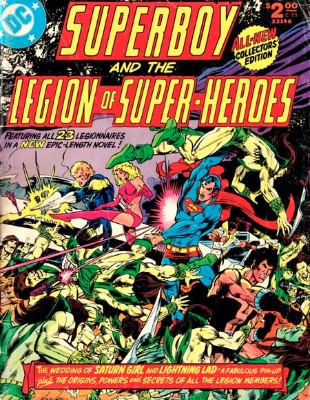 On their honeymoon, they are kidnapped by Lunarites, but are eventually rescued by the Legion.

This is a treasury-sized book that is hard to store, so it is seldom found in very high grade. 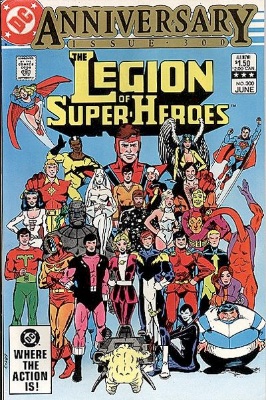 In 1983, DC Comics celebrated the 300th issue of the Legion of Superheroes with a collection of short stories illustrated by popular Legion artists from the past.

Ultimately the story changed some of the Legion continuity that had been established in past issues. 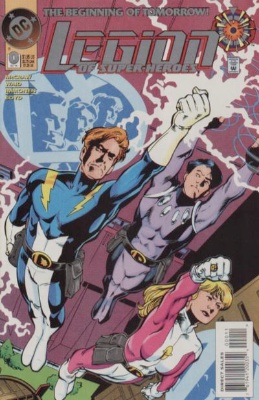 In 1994, Zero Hour, a DC Comics crossover series that tweaked several continuity issues that plagued many characters, provided the launching pad for a reboot of the Legion.

This new series, the fifth series titled Legion of Superheroes, started with issue #0 and retold the origin of the superhero group. 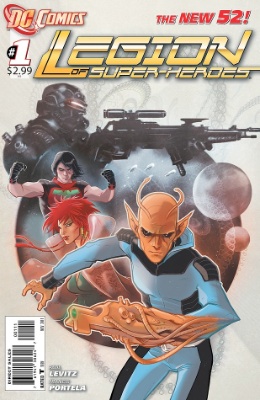 Not everybody rejoiced at the thought of New 52, but a couple of years on, it's widely regarded as successful.

Early issues of most titles have rocketed in value, as new collectors seek the best examples. See example prices below.

Have Your Legion Comics Valued

Sell My Comic Books will value your comics for insurance, or make you a Dollar offer if you wish to sell. Click to get started.

DC Comics: Legion of Superheroes and Other Price Guides
We've worked hard to provide you with accurate price guides for many of the DC Comics stable of superheroes.

Superboy #68: 1st Bizarro is a Hot Comic
Find out why this book is one of the 100 hottest to invest in today.