What are Scarecrow Batman comic books worth?

Click on any image or link to see the current values of this super-scary Batman villain.

Have Your Scarecrow Comics Valued!
If you've got some Golden Age or Silver Age copies of Batman or Detective Comics featuring the Scarecrow, then click here to have them valued FREE by Sell My Comic Books! 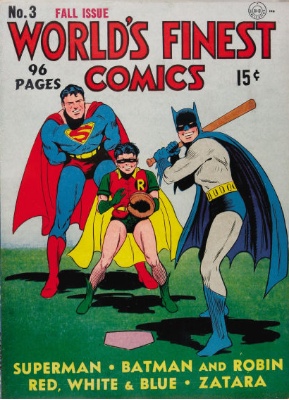 Bill Finger and Bob Kane created The Scarecrow for the story Riddle of the Human Scarecrow in World's Finest Comics #3. In it, we see the origin of The Scarecrow, told for the first (but not the last) time. After some scenes from his childhood, Professor Jonathan Crane is shown pulling out a handgun in his class, firing it at a vase to demonstrate the way that guns can create fear. Modern psychologists would probably call him a sociopath.

He embarks on his criminal career as The Scarecrow, and gets fired from the University (for stunts like firing a gun in class), and begins to derive pleasure from causing others to experience fear. The Dynamic Duo get wind of his crime spree, and of course, they capture him, sending him to jail. He vows to get free, and of course, it wouldn't be long until that took place.

Thus, The Scarecrow was set up to be the kind of villain that bad dreams are made of. He was scary, he seemed to have no conscience, and his entire persona was built around fear.

He would only appear once more in the Golden Age, oddly enough. Perhaps he was too frightening for the then-younger audience? This was, in any case, many years before Seduction of the Innocent, and since Finger and Kane are long dead, we may never know. 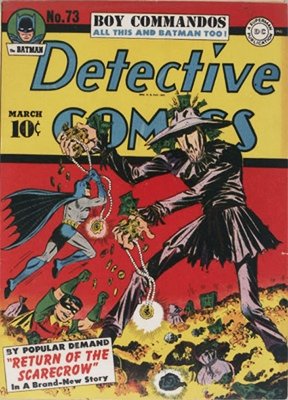 Detective Comics #73 was not the first appearance of the villain known as the Scarecrow, but it was the first time that he would grace the cover of Detective.

The Scarecrow was, without doubt, Batman's most frightening villain to date, or at least that was the idea. By the time of Detective #73, he'd escaped from the prison cell the Caped Crusader had sent him to in World's Finest #3.

In this issue's lead story, The Scarecrow Returns, The titular villain engages in a strange sort of pre-planned, themed crime spree that was typical of Batman and Detective in the 1940s and 1950s: he commits a series of crimes that center around three-letter words. Why is anyone's guess.

Batman and Robin apprehend him (in the act of robbing a depressingly stereotypical "Oriental Curio Shop," and he is sent back behind bars where he belongs.

This, oddly enough, considering what a meaty and genuinely interesting character he was, would be the Scarecrow's last appearance for the duration of the Golden Age, and a good chunk of the Silver Age. He wouldn't appear again until Batman #189 in 1967, at which point he would begin a process of becoming gradually more creepy with each appearance.

Detective #73 was written by Don Cameron and features art by Bob Kane, with a truly terrifying Bob Kane cover, in which the skeletal Scarecrow seems to have become 30 feet tall. This is a classic Golden Age issue of Detective with an iconic cover, and as such, fetches a good price no matter what the condition.

By the time of The Scarecrow's re-emergence in Batman Comic #189, the world of comic books was vastly different from the one that had last seen his frightening countenance in 1943.

Comics had become more mature in many ways, but one thing hadn't changed, at least in the world of Batman: villains still purposely left clues to what they were doing and planning, daring the Caped Crusader to catch them. One wonders what would have happened if they hadn't been so stupid. Would they have started "getting away with it," willy-nilly and pell-mell? Probably.

Anyway, Dick Grayson sees The Scarecrow and his henchmen, disembarking from a submarine in the lake in Gotham Park (!) and shortly thereafter, the Dynamic Duo spring into action.

The Scarecrow deploys a new method to stop them: he activates a transmitter on his submarine that broadcasts a fear-inducing signal. The signal reduces Batman and Robin to blubbering, terrified blobs of jelly, which is actually kind of a gas to see.

Of course, with some help from Alfred and the good ol' Bat-Computer, the Dynamic Duo figure out Scarecrow's next few crimes. Batman turns the tables on The Scarecrow by setting off the security alarm in the home of his rich friend, Jeremy Fall. The alarm frightens The Scarecrow into making mistakes, and the Caped Crusader makes short work of him. Irony can be pretty ironic, sometimes.

Written by Gardner Fox and penciled by Sheldon Moldoff in typical 1960s Batman style, Batman #189 is a valuable issue for collectors and very important for anyone interested in The Scarecrow. 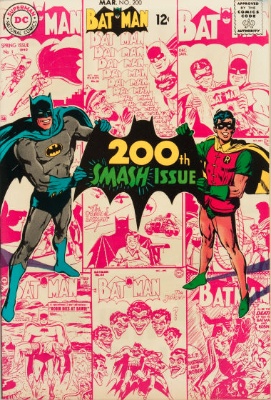 In Batman #200, Jonathan Crane debuts his new fear-inducing scheme: a pill that makes whoever takes it mortally afraid of one particular thing. Of course, the drug in that pill is deployed against the Dynamic Duo, who get the fear, big-time.

Scarecrow gets away, and Batman and Robin are so shaken that they plan to give up crime-fighting until good ol' Alfred recounts their origins and reasons for becoming superheroes in the first place.

Suitably stoked, the Dynamic Duo typically turns the tables on the Scarecrow, frightening him into giving up. Irony can indeed be pretty ironic, but less so when it becomes a predictable pattern.

Batman #200 was written by relative newcomer Mike Friedrich and penciled by veteran Chic Stone, and while not as valuable as #189, is quite sought-after. 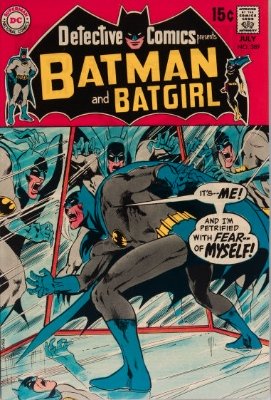 Detective #389 presents a pretty typical Scarecrow story called Batman's Evil Eye, in which Batman believes that he is becoming more frightening to criminals. Of course, it is in reality The Scarecrow who is responsible for criminals' heightened fear of the Caped Crusader.

Batman turns the tables on the Scarecrow, as per usual, and yada yada yada. Yes, it's more of the same, but Detective #389 isn't interesting or valuable for the story. It's worth your attention for the fab Neal Adams cover art, depicting Batman in a house of mirrors, paralyzed with fear. In typically declamatory DC cover art dialoge fashion, Batman says that he is Petrified With Fear--Of MYSELF!!!

The script was written by Frank Robbins, and the pencils were by Bob Brown, whose noir-ish style would appear in the pages of Detective for some time to come.

Scarecrow Batman Issues: The Joker #8 (August 1976): A Fear Contest With The Joker 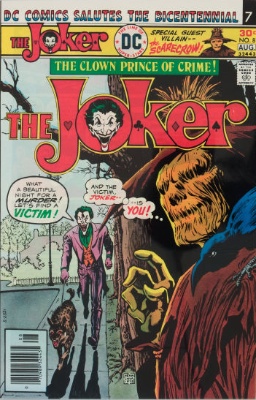 Yes, The Joker's own title. The days of the "DC Explosion" were heady ones indeed, heady enough for The Clown Prince of Crime to get his own title. (See our article on Joker Comics here.) It wasn't the first time a villain had a title of his own, but it was a first for DC.

In each issue, The Joker would battle either another Batman villain or another Gotham City hero. The hang-up that led to the series' cancellation was the Comics Code, which stated that a villain had to be punished, leading to the Joker's imprisonment at the end of each issue.

In Joker #8, Elliot Maggin and Irv Novick (writer and penciler, respectively) give us a story called The Scarecrow's Fearsome Face-Off, in which The Joker tries to outdo the Scarecrow at scaring people with some stolen fear gas from S.T.A.R. Labs.

In this two-issue, cross-title story, the Dynamic Duo battle The Scarecrow and his new fear-broadcasting machine. The story doesn't really add to The Scarecrow's Batman villain character in any specific way, but there is something undeniably cool about the Batman comics of this period. 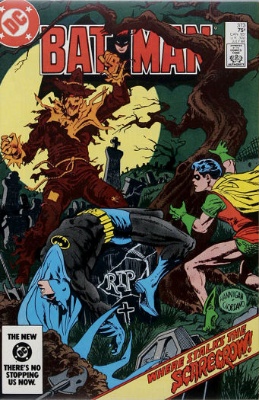 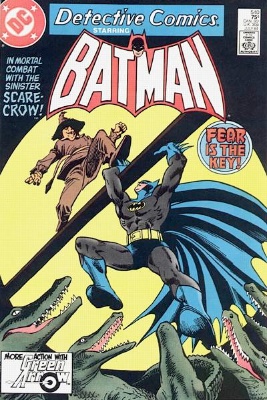 Doug Moench was writing both Batman and Detective at this point, bringing things into a far darker, more noir-ish state than they'd ever been in before. The immortal Gene Colan lent both titles suitably moody pencils. Dick Grayson had grown up, renamed himself Nightwing, and left for the Teen Titans at this point.

The Robin who fought Scarecrow alongside Batman in these issues is Jason Todd, who has, if I understand correctly, been made not to exist, then exist again, and then exist only as part of an alternate continuity. Or something like that. Oh, the DC Universe...

While you can't tell the retcons without a scorecard, you can tell that these issues of Batman and Detective are quite worthwhile, as are all of the issues the Moench/Colan team did in the 1980s. In top condition, these command a better price than most other comics from the same period.

There are the Batman villains you laugh at, and the ones who scare the bejeezus out of you. The Scarecrow falls into the latter category.

Indeed, since he was created by Bill Finger and Bob Kane in 1941, The Scarecrow has been the DC Universe's very embodiment of fear.

In 2005, he was brought to life with otherworldly creepiness by Cillian Murphy in the Christopher Nolan film Batman Begins, and all who saw the scene in which The Scarecrow's fear gas is turned back upon himself by the Caped Crusader had the bejeezus well and truly scared out of them.

The Scarecrow Batman villain is really Jonathan Crane, and he begins as one of comicdom's stock characters: the University Professor gone bad who uses his unique knowledge and skills to commit crimes. 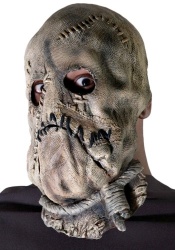 The Professor schtick is a great disguise, and it almost inevitably means that the hero at one point or another will unwittingly consult the very professor in question for help while working on the case.

Jonathan Crane was a Professor of Psychology at Gotham University who became so obsessed with rare books that he turned to a life of crime to finance his addiction. Ever since he was a child, Jonathan Crane had been very interested in the emotion fear. His youth was filled with such charming activities as chasing birds to watch them flee, filled with panic. A charming lad.

As a Professor of psychology, Crane taught his students the psychology of fear. Outside of class, he was a recluse, spending his evenings poring over rare psychology volumes on fear. He was, in short, the guy you'd immediately choose as the serial killer in any BBC murder mystery you could name.

Fascinated by what fear could do to human beings, he embarked on a life of crime to feed his rare-book habit, using fear to manipulate people's actions and frighten them into a submissive, almost catatonic state, choosing a costume that somehow universally frightens even adults: a scarecrow. Hint: they scare more than crows.

In the Golden and Silver Ages, he was almost exclusively a Batman villain, but in the years since, he's been seen battling other heroes. None, however, seem as perfect a match for him as Batman. Two frightening creatures of the night, fighting for domination. One seeking to frighten criminals into going straight, the other seeking to frighten all and sundry to further his criminal ends.

Batman Comic Book Price Guide
Find out what collectible Batman comic books are worth, from #1 (1939) to the key issues of the 1980s and beyond.

Joker Comic Book Price Guide
This guide not only features the Joker Comics of the 1970s, it also highlights important appearances and Joker covers.

Other DC Comics Characters in Scarecrow Batman Comics
What are the rest of the DC crew worth? Find price guides for Green Lantern, Flash, Superman, Wonder Woman and more.

Batman Villains List With Prices For First Appearances
The Riddler, Man-Bat, Deathstroke, Mr. Freeze and many more feature in this roundup!