How much are your key Batman first appearances worth today? We're talking about Alfred, Commissioner Gordon, Batwoman, Batgirl, Huntress, Aunt Harriet and more!

We have provided record sale prices, plus current minimum values, of all the first appearance comic books for the supporting Batman cast. Simply click on any image to begin. 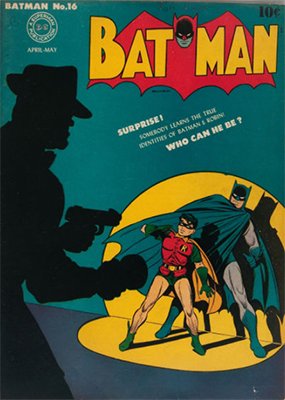 The Golden Age Alfred, otherwise known as the "Earth Two Alfred," is not named Alfred Pennyworth. He is "Alfred Beagle." Since this Alfred has been retconned out of existence, he never existed in the first place, and logically, we can't really be talking about him.

Anyway, Alfred Beagle first appeared in Batman #16, in April of 1943. Fearing for their secret identities, Bruce Wayne and Dick Grayson were initially reluctant to hire a butler, although unwilling to hurt Alfred's feelings by rejecting him utterly.

Of course, eventually, Alfred proved himself, and ended up working at Wayne Manor all through Bruce's marriage to Selina Kyle, and the birth of their daughter Helena.

Alfred Beagle even stayed on after the deaths of Bruce and Selina and the departures of Helena and Dick Grayson. 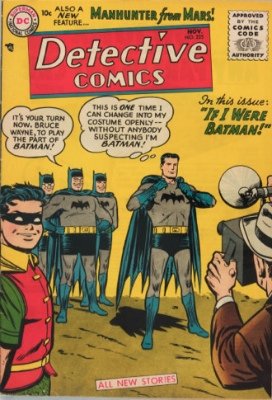 The "Earth One" Alfred is considered by some to have made his first appearance in Detective Comics #225 (November, 1955, which is also the first Martian Manhunter appearance).

Some, conversely, would say that the "Earth One" Alfred begins with Batman #110 (September 1957), when the story of his first encounter with the Dynamic Duo (in reality Alfred Beagle, remember?) is revised.

By that standard, the next issues of Detective and Batman would be the debut of the "true" Earth One Alfred, Detective Comics #234 and Batman #101 (both August 1956).

Some say that it makes little difference, since neither one actually ever existed. Sigh... 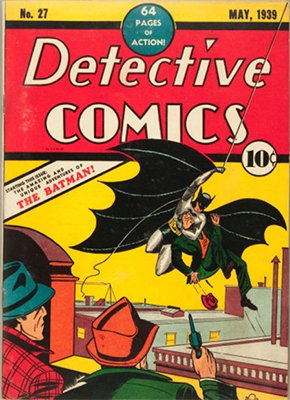 Anyone familiar at all with Batman is familiar with Jim Gordon. Always stoic and always on Batman's side, even when things look bad for the Caped Crusader.

In almost every iteration, Jim Gordon is Batman's friend and confidante, and his closest ally within the political machine of Gotham City. 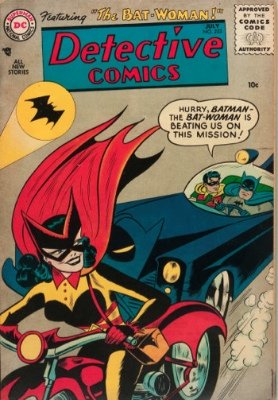 When Frederic Wertham's Seduction of the Innocent came out in 1954, it suggested (horror of horrors) that there was a pronounced and unnatural "relationship" between Batman and Robin.

Homoeroticism has never been a very comfortable trope in mainstream comics, and in the '50s, it was tantamount to calling Batman a "Pinko" or a Communist Sympathizer. Perish forbid!

She would stick around until about 1964, when the powers that be at DC decided that Batman had become too silly, and the entire "family" of Batman characters had to go.

By then, there was also a proto-Batgirl, known as Bat-Girl, of whom more momentarily, who had been introduced as a love interest for Dick. 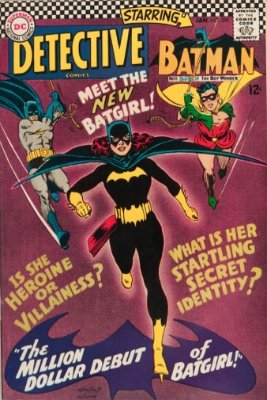 In 1967, Barbara Gordon, the daughter of Jim "Commissioner" Gordon of the Gotham P.D., earned her superhero stripes as Batgirl.

Making her debut in the pages of Detective Comics #359, Batgirl would go on to have quite an interesting, if very secondary role in the Bat-i-verse.

(She had nothing to do with the "Batman Family" character of "Bat-Girl," otherwise known as Bette Kane, one-time love interest of Robin, who had debuted in Batman #139, in April of 1961, and who would disappear in the Great Batman Family Purge of 1964.)

Batgirl would make regular appearances in Batman and Detective, and was buddy-buddy with Dick Grayson, the original Robin, although there was never really a romance.

She would ultimately go on to retire from superhero activity, be shot and crippled by the Joker in Alan Moore's pivotal graphic novel The Killing Joke, and be rebooted as Oracle, the paraplegic computer hacker. Of course, later, this would all be retconned. 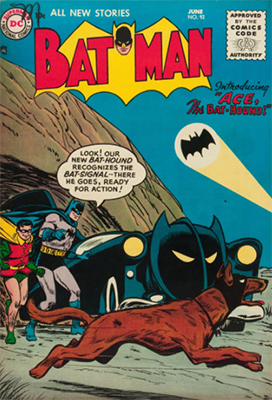 Well, it had to happen eventually. Superboy's super-dog, Krypto, had been a smashing success. TV was overrun by charming and heroic German Shepherds like Rin Tin Tin.

Batman, it was clear, needed a crime-fighting German Shepherd. He needed Ace, the Bat-Hound.

Ace debuted in Batman #92 (July 1955) and made regular appearances, fighting crime with his doggie Bat-mask on, until Julie Schwartz realized that Ace, along with the rest of the Batman Family, was making DC look like a bunch of chumps, in 1964.

Marvel never gave Spider-Man a "Spidey Beagle," you can bet.

Ace has made very occasional reappearances since, mostly as an in-joke. 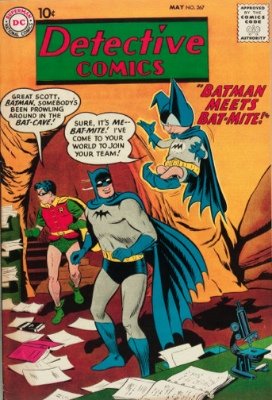 Ostensibly, he was a magical imp from another dimension who was a huge fan of Batman and Robin, and came to earth to help them, in a crudely-homemade Bat-costume.

It's probably worth a glance at Detective Comics #267 (May 1959) to decide for yourself it Bat-mite was devil or angel. He, too, was luckily removed from the Batman mythos in 1964 when Julius Schwartz decided to stiffen up Batman's backbone once again. 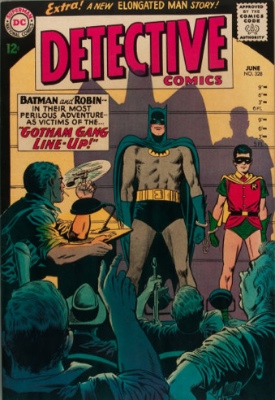 Contrary to popular misconception, Dick Grayson's peppery Aunt Harriet was not introduced to the comics after being created for the 1966 Batman TV series.

What's that? No one ever talks about Aunt Harriet? Go away, kid, you bother me. Now what were we talking about?

Oh, yes, Harriet Cooper, Dick Grayson's widowed aunt, was brought in after Alfred "died" in 1964, in Detective Comics #328 (June 1964). Well, Alfred wasn't dead, and after he came back, Harriet stayed on for a bit, until failing health compelled her to move to Boca Raton.

Still Aunt Harriet added a certain something to the proceedings, something more than just constantly hassling Bruce and Dick about how much sleep they weren't getting, or how much more milk Dick ought to be drinking. He was a growing boy, you know.

Harriet added a protective element, insuring that there could in no way be any sort of an inappropriate relationship between Bruce and his youthful ward, Dick.

More than just a "negative Batman", the Man-Bat (Zoologist Kirk Langstrom) was an interesting character who occupied a new grey area in superhero comics: he was neither hero nor villain, nor was he anti-hero. He just was, and Batman had to deal with him.

The closest thing to him was across the aisle in the Marvel Universe, where Spider-Man's sometime-villain The Lizard probably served as the Man-Bat's prototype.

Neal Adams designed Man-Bat, and penciled Detective #400. It is a genuine classic, even if, as a late Silver Age comic, it isn't worth all that much.

(Editor's note: high-grade copies have rocketed in value in recent years; this is a tough book to find in the high 9s.) 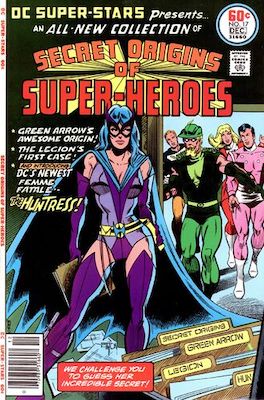 Here's the straight poop: on Earth Two, Selina Kyle, the Catwoman, went straight and married Bruce Wayne. They had a daughter, Helena Wayne, who grew up to become The Huntress.

Selina Kyle's first appearance was in Batman #1 (Spring 1940), where she was referred to as "The Cat." Batman #1 is worth about seven Fort Knoxes, if you can find one, just FYI.

Earth Two's Bruce Wayne died in the 1970s, as did Selina Kyle. After a sad and pitiful attempt by Earth Two's then-already-long-in-the-tooth Dick Grayson had a go at becoming "Batman II" (of which the less said, the better), and Helena Wayne, aka The Huntress, became prominent.

She debuted in DC Super Stars #17 (November 1977) and bounced around the Earth Two stories of DC's late-'70s re-infatuation with its Golden Age heroes gone gray, often as a backup in Wonder Woman, until she was incinerated, along with Earth Two's Dick Grayson, in the Crisis on Infinite Earths. She was then erased from history.

Of course, she came back, completely different, later, with the same first name, same costume, and a history that was pretty much the same, except that she wasn't Batman and Catwoman's daughter any more. 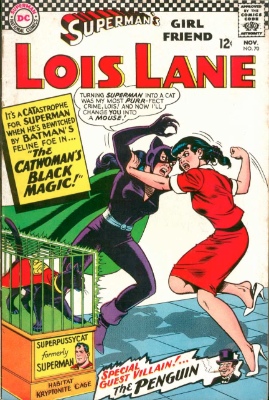 Earth One's Catwoman, as you may know, is a whole different kettle of fish. She was a criminal. A cat burglar. Except when she was a murderer, which DC decided was not the "real" Selina Kyle of Earth One or Earth Two.

But if we talk about that, we'll lose our PG rating here, so that's enough of that.

The Earth One Catwoman made her Silver Age debut in Superman's Girlfriend, Lois Lane #70, in November of 1966, a direct result of Julie Newmar's portrayal of Catwoman in the then-new TV series.

She appeared in many many Batman-related comics until the Crisis rendered it all moot in the mid-'80s.

Why Batman Characters are So Enduring

Unlike any other in comicdom, the cast of supporting and auxiliary characters that have appeared in Batman, Detective Comics, and all the other comics that have featured the Caped Crusader for the last 70-odd years is huge, varied, and interesting.

One cannot imagine Batman, for example, without Alfred, his faithful butler, or Commissioner Gordon, just to name two.

Of course, for every Alfred there is a Bat-Mite, or an Ace, the Bat Hound, but you get the picture.

Superman may have had his Lois Lane and his Jimmy Olsen (OK, even his Perry White), but Batman (and millionaire playboy Bruce Wayne) has a rich, varied, and fascinating group of supporting players who enliven things when called upon to do so, and who are as well-known as many other super heroes.

Often, these characters will be central to the plot of an issue or several-issue arc, or simply will function as convenient plot devices to move things along. Whatever their use, Batman's supporting characters are just plain important, at least most of the time.

Don't believe me? OK, Here's a test: How many Green Lantern supporting characters can you name?

If you've got some old comics featuring significant supporting Batman characters (including issues of Batman, Detective Comics, The Brave and the Bold, and others) then click here to have them valued FREE by Sell My Comic Books!

Batman Characters with Other DC Comic Superheroes
Learn the value of comic books where Batman characters cross over, including Brave and the Bold.

First Appearance Batman Villains List and Price Guide
What are the first appearance of Batman villains and anti-heroes (including Catwoman) worth? Find out here!

Batman Comic Book Price Guide
Get an idea of the value of your Batman collection with this issue-by-issue price guide.

Scarecrow Batman Comic Book Price Guide
First appearing in World's Finest #3, the cover gives nothing away about this terrifying villain!

Joker Comic Value Guide
Batman's most famous and intelligent enemy has been around since Detective days. Find out the value of his appearances here.

Teen Titan: Characters, Issues and Price Guide
Find out what keys in the Teen Titans and New Teen Titans runs are worth today.

Catwoman Comics Values
Find out the worth of your Catwoman appearances, including the hot Adam Hughes covers.