Origin and First Appearance of Superheroes and Villains Beginning With W 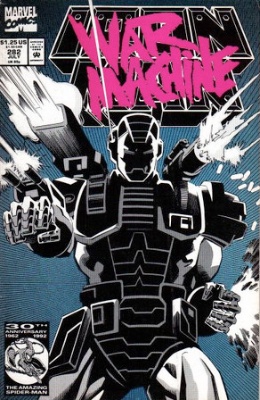 Have us appraise your comics free of charge

He had taken over the role of Iron Man after Tony Stark's apparent death, but quit Stark industries after finding out that Stark was alive.

He eventually joined the West Coast Avengers, and his life was always thereafter intertwined with Tony Stark's to an extent, whether or not he was active as War Machine.

The armor is essentially a higher-powered version of the Iron Man armor, outfitted with the same weapons of war as a modern jet fighter. 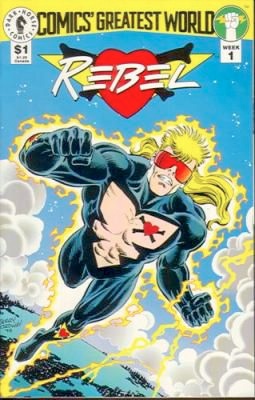 Warmaker is a massive man and a former US super soldier.

He was imprisoned in the Vault but escapes, inducing massive damage across Golden City.

Later, Warmaker joins the Agents of Change to help lead their fight in seeking Golden City's independence from the United States.

Get a free comic book appraisal!

Janet Van Dyne was the daughter of a wealthy scientist.

When her father was killed by a monster he'd unwittingly unleashed from another dimension, she goes to Dr. Henry Pym (Ant-Man) for help.

He enlists Janet's assistance, giving her some of his shrinking serum and subjecting her to a procedure that will enable her to grow wings as she shrinks.

A gun that fires "wasp stings" and a red-and-blue outfit complete her emergence as The Wasp.

Initially, this was only intended to help Henry Pym avenger her father's death, but she falls in love with Pym, and becomes his partner, later joining the Avengers with him and marrying him. 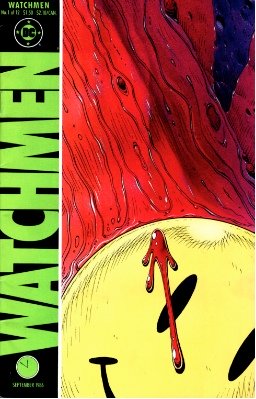 Get your copy valued here

The Watchmen are a super team with a past.

In a Golden Age/Silver Age, JSA-style scenario, there are older heroes and younger ones together on the team, although by the present the government has outlawed "Mystery Men."

The team comes back together, in a way, when one of the oldest, The Comedian, a violent, jingoistic thug and rapist who was the sole member of the team allowed to keep working by the government, is murdered.

The others, including Nite Owl (inspired by Blue Beetle, with no real super-powers), Silk Spectre (daughter of an original member, and also non-super-powered, and based on Nightshade and Black Canary), Dr. Manhattan (a nuclear-age almost omnipotent hero initially inspired by Captain Atom), Ozymandias, the "smartest man on earth," (based on Peter Cannon, Thunderbolt), and Rorschach, psychotically unstable and violent with a black and white sense of morals and an inkblot mask (based on Mr. A and The Question).

Have your Silver Age DC comics appraised for sale

When criminal Mark Mardon found his brother's secret notes on how to control weather, Mark took the notes and created a wand that could manipulate the elements.

Using his powers for evil, Mardon becomes the Weather Wizard, and begins terrorizing America until he is stopped by the Flash. 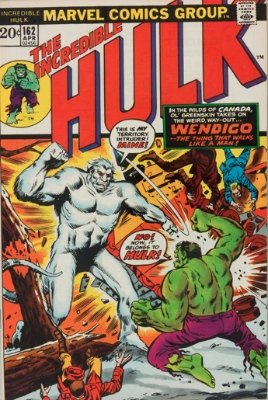 The Wendigo is a furry, white beast that arises when a human succumbs to cannibalism in the great north woods.

Over the years, many characters have fallen under the curse of the Wendigo, gaining super-strength, durability, and endurance when they transform. 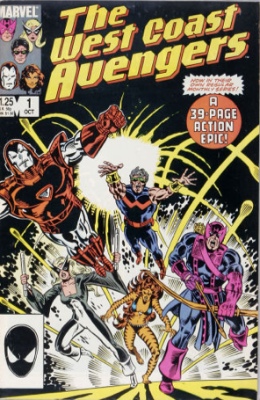 Have your comic collection appraised today

The West Coast Avengers were started by Hawkeye, after a suggestion from The Vision that the Avengers should expand their influence and protection to the West coast of the United States.

There had been no super-teams exclusively devoted to protecting that area since the Champions disbanded.

Hawkeye recruits Mockingbird (with whom he has a romantic relationship), Wonder Man, Iron Man, and Tigra to join him. Later, Henry Pym and Moon Knight join, and the Scarlet Witch and The Vision help out at various times.

The group wouldn't last long, with infighting and trouble with the original Avengers team.

Eventually, they would disband, and the West Coast Avengers HQ would be converted into Avengers Academy to train up-and-coming crimefighters. 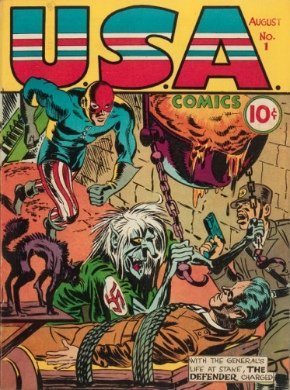 Origin and First Appearance, The Whizzer

Young Robert Frank was on a trip to Africa with his father when he found himself bitten by a cobra.

His father gave him a transfusion of mongoose blood, which counteracted the deadly venom and also gave him super-speed.

Donning a yellow costume with winged headpiece, a la Jay Garrick, he became The Whizzer, so fast that could run up walls and create cyclones.

The Whizzer lasted about five years, and after a brief membership in the All-Winners Squad, disappeared as the Golden Age waned.

He was revived in the 1970s, becoming entangled in the Avengers continuity, before finally dying. 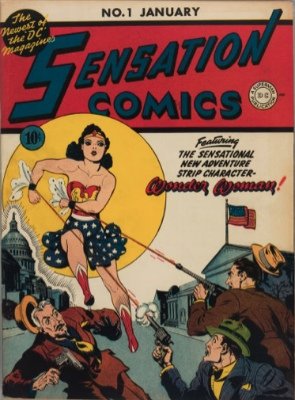 Ted Grant was orphaned at a young age, but before his parents died, his father had vowed that he should have physical training and coaching in many sports so that his son would never be afraid of life.

As a young man, Ted saved a heavyweight champion boxer, "Socker" Smith, from being mugged.

Smith took young Ted under his wing and trained him, until Ted was his equal or better.

Smith was killed as a result of a fight-fixing scheme by his managers that went wrong, and Ted Grant took action.

Inspired by a boy with a Green Lantern Comic book, he took the name Wildcat and embarked on a crime-fighting career.

He is an expert fighter and martial artist, and was later granted nine lives by Zatara, who was able to do so to avert a curse placed on Wildcat by another wizard.

Ted Grant has by now used up all eight of his extra lives. 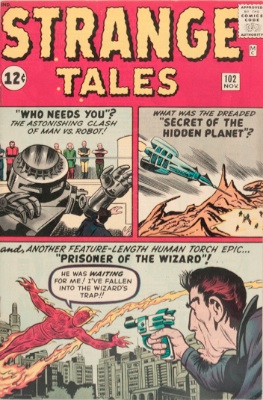 Bored with his life, Wittman captures the Human Torch and impersonates him.

However, this doesn't last long and Wittman is incarcerated, cementing a lifelong hatred of the Torch. 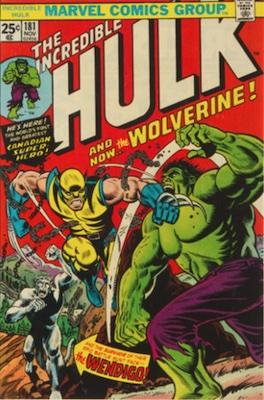 Get your copy valued free!

At the time, no origin was offered, and over the years many differing stories have been advanced for Wolverine's past and how he got his powers.

One thing is certain, however: Wolverine uses the name Logan, and is a mutant.

He can heal almost instantaneously, has tremendous strength and agility, great skill in combat, and has had an indestructible adamantium framework attached to his skeleton, including adamantium claws that pop out of his skin when he goes on the attack.

In Hulk #180 and #181, however, Wolverine was just a wisecracking Canadian with claws who battled Hulk unsuccessfully.

He has, of course, since then, become perhaps the most recognizable and important character in the Marvel universe. 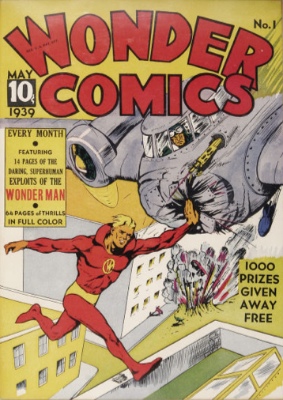 After the success of Superman, everybody wanted to get in on the action. So, Will Eisner created Wonder Man (secret identity, Fred Carson), a thinly-veiled Superman knockoff in red tights.

Carson was given a mystical ring by an old Tibetan monk that gave him super-strength, along with pretty much all of Superman's other powers.

DC Comics instigated a successful lawsuit against Fox, leading to Wonder Man's immediate removal from the Fox roster of characters.

This is the one and only appearance of this Wonder Man, who is no relation to the Marvel Comics superhero of the same name (see below). 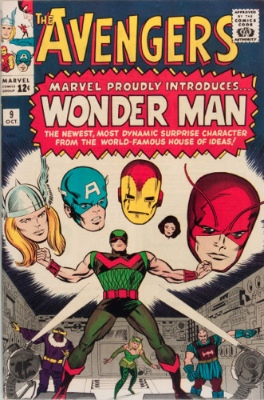 Get a free comic book appraisal!

Simon Williams was duped by Baron Zemo into becoming a super-hero in a bid to destroy the Avengers.

Desperate for money, he agrees to a plot in which he is given super-powers to allow him to infiltrate the Avengers as a new member.

At the last minute, he betrays Zemo, but finds out that the source of his super-powers (super-strength, speed, and invulnerability) will kill him, unless he receives a serum that only Zemo can give him.

He seemingly dies, but is in reality only in suspended animation.

His brother, Eric, is driven mad, and becomes The Grim Reaper and attempts several times to destroy the Avengers.

Wonder Man was revived in the 1970s and became an Avenger full-time, before seemingly going crazy and leaving the team. 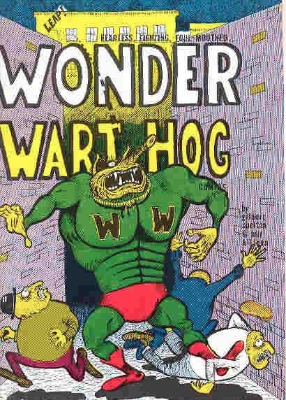 Get your copy of this comic book valued

Wonder Wart-Hog was a pig-like parody of Superman, and had the secret identity of Philbert Desanex, mild-mannered reporter.

His powers are similar to Superman's, and Wonder Wart-Hog is characterized by having the head of a pig, complete with exaggeratedly-long snout. 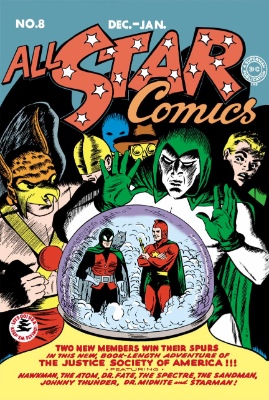 Wonder Woman was the first female superhero at DC Comics.

When Army pilot Steve Trevor crash-landed on Paradise Island, he was rescued by two Amazons, one of whom was Diana, the daughter of Queen Hippolyta.

Diana and her mother helped Steve recover from his injuries, and when they learned of the threat of the Nazis, Hippolyta decided that an Amazon should go back to America with Steve and help out in the war effort.

Diana wins the competition to choose the champion, and goes leaves Paradise Island with Steve in a patriotic costume as Wonder Woman.

In addition to her super-strength and speed, Wonder Woman is an expert fighter and healer, and has magical, bullet-deflecting bracelets and an indestructible magic lasso that compels anyone tied in it to tell the truth. 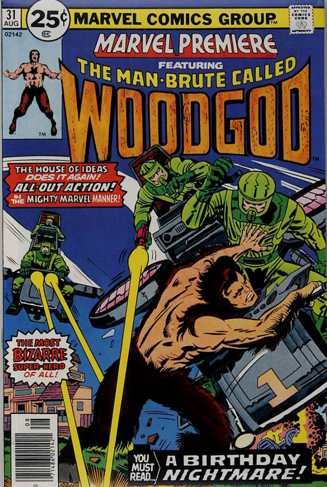 Woodgod, half man-half faun (something like a satyr) was created by two scientists from a combination of human and animal DNA.

He has superhuman strength and immunity to chemical toxins, along with enhanced senses.

We'll Give You a Dollar Offer For Your Vintage Comic Books