Marvel was at the forefront of the 70s martial arts craze that swept the world, following Bruce Lee’s rise as an international star around his martial arts movies.

The best of his work is the cult classic Enter the Dragon. 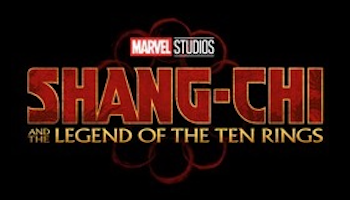 Marvel Comics actually used Bruce Lee as a template for their version of a supreme martial artist. They created an iconic figure that could beat on super powered and non-super-powered thugs alike.

Thus was born Shang-Chi, the son of the dreaded Mandarin and known as the greatest hand-to-hand combatant in the Marvel Universe.

Shang-Chi first appeared in Special Marvel Edition #15, written by Steve Engleheart and graced with the art of Jim Starlin.

The character was so beloved that the original series lasted 10 years. Then in 1983, tastes started to change and the Bronze Age had given way to the Copper Age; at that point Shang-Chi and the 70s fade from the scene.

In the Copper Age, superheroes were all the rage, especially the X-Men. Shang-Chi appears intermittingly throughout Marvel in guest appearances.

Eventually he returns to Marvel full-time. More recently, Shang-Chi was even included in a video game in the mobile application Marvel Future Fight.

"All good things come to those who wait." Marvel fans have had to wait 38 years for a stand-alone Shang Chi movie.

Marvel Studios will premiere Shang-Chi and the Legend of the Ten Rings in February, 2021.

"They (Marvel) have hired David Callaham in December 2018 to write a screenplay for Shang-Chi. Recently, at Marvel Comic Con 2019 it was announced Daniel Cretton would be directing.” (Wiki and CBM). It will star Awkwafina, Simu Liu, Tony Chiu-Wai Leung.

The lead Simu Liu has a journeyman’s level of experience in film and TV. It should be noted he was a stuntman during the beginning of his career; this could make for some very realistic fight scenes.

This guy is the real deal, a guy that can act, and fight. Iron Fist eat your heart out!

Speculators, prepare for some Kung Fu fighting amidst the back issue bins. 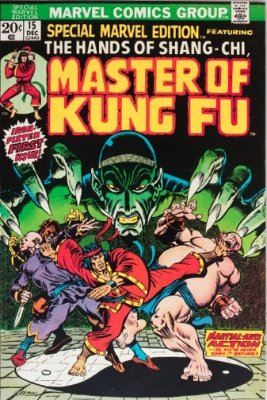 The Master of Kung Fu storyline begins with Special Marvel Edition #15. Shang Chi was created in 1973 by Steve Englehart and Jim Starlin. He first appeared in SME #15.

The martial arts was very popular in the 1970s and none more so than Bruce Lee. Steve Englehart admitted to having patterned him after Bruce Lee.

Nowadays, everyone loves the ultimate fighters and cage matches. But back in the day, most martial arts styles were separated by custom and nuance. Bruce Lee’s style of martial art "encompassed all, mirroring none." Shang-Chi is an homage to Bruce Lee.

Much like Bruce Lee, our Marvel Superhero Shang-Chi has also studied many forms of martial arts, but is a master of Wu-Shu styles and proficient in numerous unarmed combat techniques.

Though only a normal man, his Chi abilities are his superpowers. Shang-Chi can focus his Chi and can dodge and deflect bullets with his bracers.

He can sense others Chi kind of like Daredevil’s radar, and therefore he is hard to sneak up on. Further, he can use his Chi power to summon almost supernatural strength with ability to kick down steel doors.

Shang-Chi can hold his own in a fight even against super-powered villains. He can "bring the pain" to be sure; but how about the profit?

I think you will be pleasantly surprised by the long-term results from Special Marvel Edition #15. Can this old school martial artist, Shang-Chi, make martial mayhem payoff for speculators? 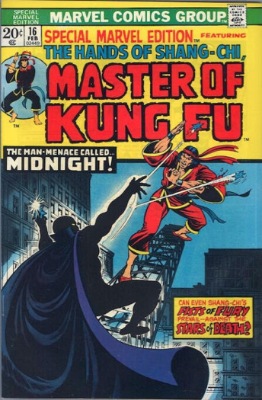 This book was created by Steve Englehart, Jim Starlin (writing) and Jim Starlin (pencils) in February of 1974. It makes sense to check out Shang-Chi’s second appearance: after all, the second appearances of most characters are being collected by many Millennials as an alternative to the higher-priced first appearance comics.

Apparently, Midnight throws stars of death as his choice of weapons. The cover has a resplendent scene of him battling Shang-Chi over the Manhattan Skyline while balancing on a construction crane.

There is a flood of possible books that are keys for a Shang-Chi movie, but this is the next best thing to his first appearance. Besides, Midnight is too cool a name not to appear at some point in the MCU.

Every once in a while, "the apple does fall ‘quite far’ from the proverbial tree."

Such is the case with Shang Chi, a true martial artist and superhero. He couldn’t be further from his father’s path, because his father is the Mandarin.

No, not THAT Ben Kingsley Iron Man 3 villain, that wretched excuse for a character is nowhere near as cruel as the villain Mandarin.

He first appeared in Tales of Suspense #50, created by a Jack Kirby and Steve Ditko team of artists and writers in 1964.

With Mandarin’s alien tech (Ten Rings of power), his status as a scientific genius, and martial arts prowess; the Mandarin matched up well against most superheroes. He was more than a match for any version of Iron Man.

Now, apparently, we will get to see him in action in the Shang Chi movie. This is going to be visceral father versus son, and the rumor is that Shang-Chi will compete in a martial arts tournament.

Watch the magic of Disney recast Mandarin into the mold of a modern villain, minus the stereotype of his previous origin story.

This mustache-twirling Machiavellian manipulator is profitable with a sizable return and positive trends from grades 9.2 all the way to 3.5 CGC for Tales of Suspense #50.

If you thought the son’s first appearance was desirable, this book is also a must-have, especially with the range of grades producing profit. 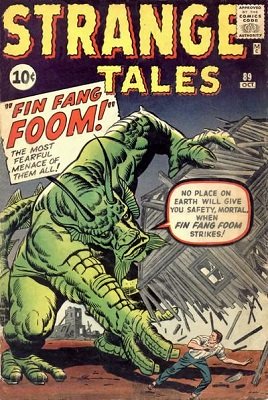 Strange Tales #89 is the first appearance of the dragon Fin Fang Foom!

He was created by Stan Lee, Jack Kirby, Steve Ditko, and Paul Reinman in 1961. This early Marvel dragon is actually of alien origin and from the same alien race that created the Mandarin’s Ten Rings.

Apparently, there is media chatter that this “Jolly-Green-Dragon” is going to appear in some form in Shang-Chi the Legend of the Ten Rings.

Given this creature is the source for which the title of the movie originated from, it is an interesting speculation bet. Buy a copy and see how the movie fares.

There should still be opportunity to flip given that the premiere is a year away. The numbers are pretty solid and long-term it has paid off.

Remember St. George and the Dragon, just keep after this speculation and you might actually slay the beast for a King’s ransom.

There is an old saying, "The third time is a charm." Perhaps that will be true with Master of Kung Fu #17; this is the third appearance of the intrepid Kung Fu warrior by Marvel, Shang Chi.

It is actually a two-for-one double key, in that it has the third appearance of Shang-Chi, but also introduces one of his eventual allies Black Jack Tarr.

This character is also rumored to be in the movie.

Master of Kung-Fu #33: First Appearance of Mordillo and his Assassin Robots 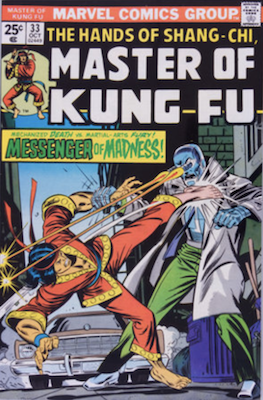 Nothing is cooler than assassination robots and Master of Kung Fu #33 has that in spades.

The main villain is an engineer that manufactures these deadly creations. Yep, it would make for a great movie to see the ultimate hand-to-hand fighter in Marvel, kick the CPU’s right of some stainless steel kill-bot.

Apparently; this book is the first appearance of Mordillo, a brilliant and evil engineer. This tech villain would kind of harken back to Tony Stark and his Iron Man saga. That could give the regular audience a reference point for understanding an anti-Iron Man as a threat.

Long-shot speculation you say? Sure, but little risk too, as a CGC 9.4 went pretty cheap last year for $50. 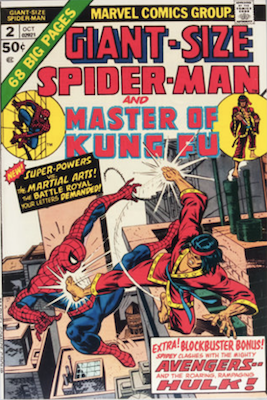 Spider-Man is the headliner for all of Marvel comics characters, and when he appears with another hero or villain, it is an event worthy of any collector.

In this title it is the first time Spidey meets Shang-Chi. It is also Shang-Chi’s first crossover book.

Giant Size Spider-Man #2 has solid numbers as well as staying power because of the subject matter. Anything Spidey has strong Spidey Kung Fu and is a great long-term investment. 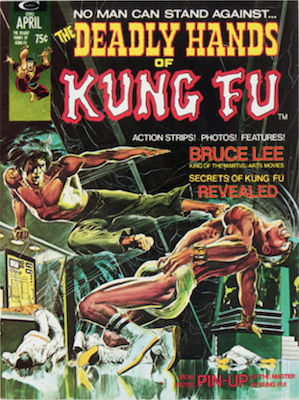 This stunning cover was created by a master of the form Neal Adams.

Adams is the artist who re-defined Batman for a generation. He is the cover artist for this comic book. This is an important book for the character of Shang-Chi as it is his origin story.

This book was created by Steve Englehart, Jim Starlin, and Gerry Conway on script. The art was given form by the team of Neal Adams, Al Milgrom and Dick Giordano in 1974.

This book is pricey for an origin story. But don’t you want to own the origin story of the greatest hand-to-hand combatant in the Marvel Universe?

The 100 Hottest Comics of 2020, With Buying Advice
See which comics are the world's most popular with investors and speculators.