This is the final part of the comic price guide. Use the links below to find the other books in this series. 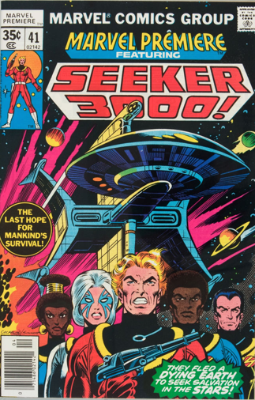 A group of future humans flees the earth, which is nearly uninhabitable, in search of a new home. 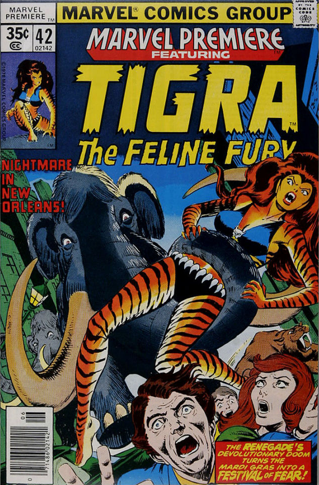 Tigra, formerly Greer Nelson, the Cat, gets drawn into a case in New Orleans during Mardi Gras. 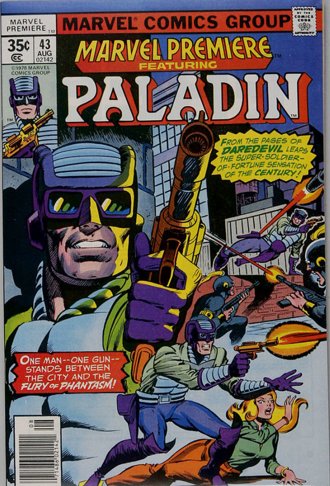 "In Manhattan, They Play for Keeps"

A spin-off from Daredevil. Paladin, a mercenary and private investigator, battles the Phantasm. 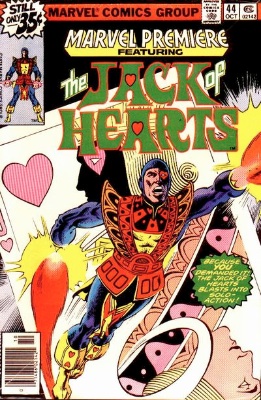 "The Jack of Hearts!"

Jack of Hearts would not get catapulted into his own title as a result. In this story, he battles the villain Hemlock (first appearance). 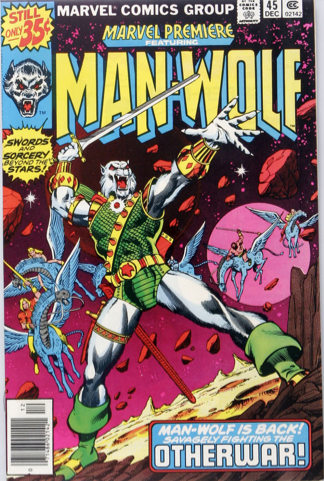 John J. Jameson Junior, in his white werewolf (Man-Wolf -- first seen in Amazing Spider-Man #124) incarnation, finds a portal to the "Other-Realm" on the moon. There, he retains his human intelligence, even though he is in wolf form.

John learns that a being named Stargod created the gem that has been making him change into a wolf for so long, and now, in the Other-Realm, he gains Stargod's strength, and becomes his successor. 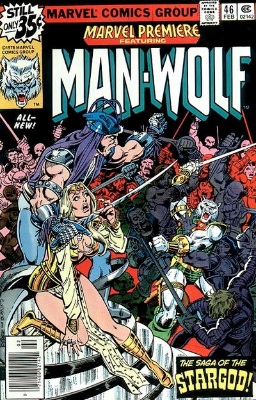 John learns the full story of Stargod and helps to defend the people of the Other-Realm from the evil Arisen Tyrk, who seeks to conquer them. 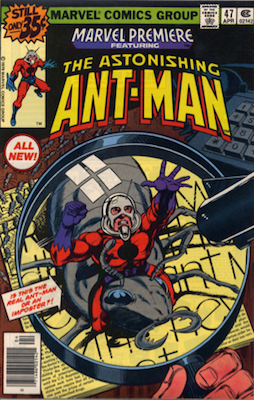 This is not Henry Pym, but his successor, Scott Lang, reformed thief and electronics expert.

Lang goes back to his thieving ways when he needs to find a cure for his sick daughter. He breaks into Henry Pym's lab, and steals the Ant-Man uniform and several canisters of shrinking gas. Using them, he breaks into Cross Technological Enterprises. 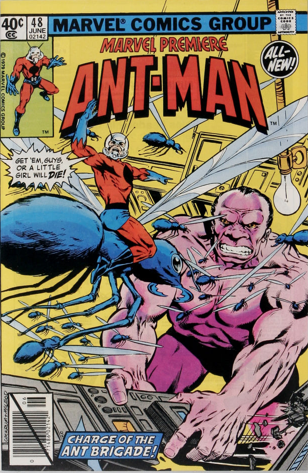 Scott frees scientist Erica Sondheim, who was being held prisoner at Cross Technological Enterprises, and she cures his daughter.

Henry Pym finds out about what Scott did, and offers to let him continue as Ant-Man if he agrees to uphold the law. John Byrne pencils. 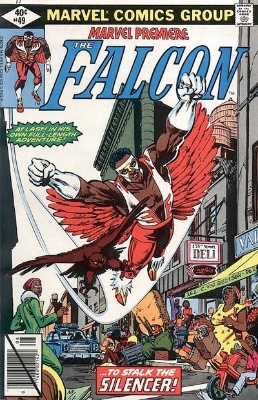 "Sound of the Silencer"

Frank Miller drew the cover for Falcon's only issue of Marvel Premiere, in which Falc battles the Silencer in the Eastern European country of Bodavia. 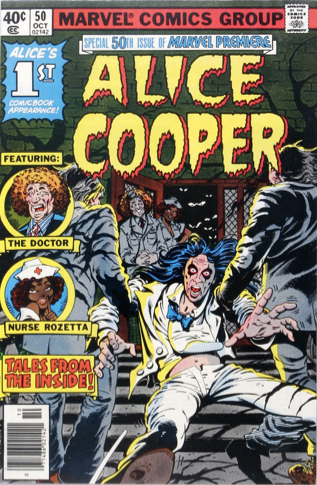 A comics adaptation of the Alice Cooper album "From the Inside," and an odd thing in almost every way.

Alice was at a career lowpoint in 1979, and this issue of Marvel Premiere is little more than an advertisement for the new album, which was surprisingly slick and MOR-oriented. 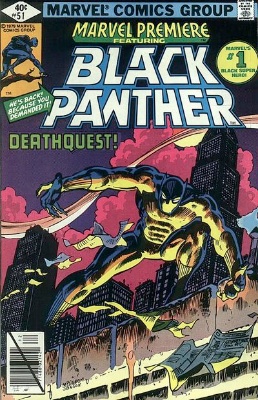 The Black Panther's own series had been cancelled with the storyline unresolved, and so "Marvel's #1 Black Super-Hero" was moved to Marvel Premiere for three issues.

In this issue, T'Challa defeats Windeagle in a story that would have run in The Black Panther #16,
had it ever appeared. 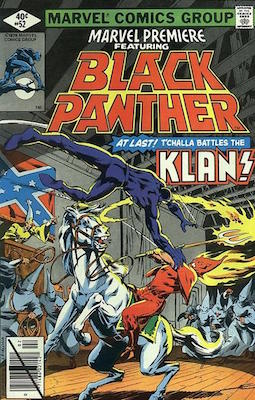 "Journey Through the Past"

T'Challa again faces the Ku Klux Klan in this story, along with the Soul-Strangler, a klansman-like supernatural being. 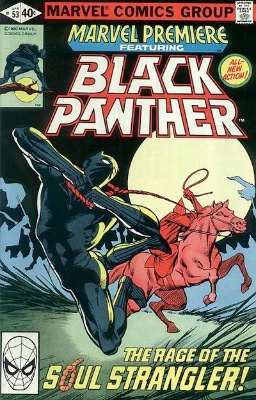 T'Challa defeats the Soul-Strangler, along the way revealing the secret Klan membership of several people he had counted as friends. 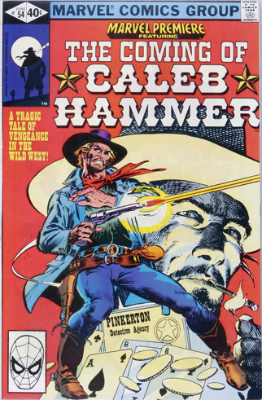 This issue would be the first and only appearance of Caleb Hammer, an Old West cowboy character, for almost 20 years. Caleb is a Pinkerton agent and a dead shot. 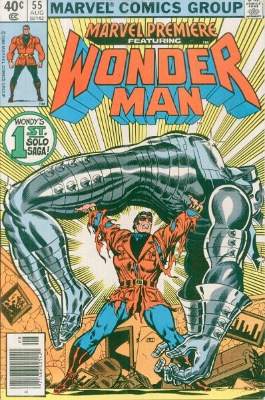 Simon Williams, aka Wonder Man, re-animated and attached to the Avengers in the late '70s, gets his first solo outing in Premiere #55.

In the story, Wonder Man must battle the robot known as Dreadnought, sent by a high-ranking Maggia (!) boss (the word "Mafia" was outlawed by the Comics Code Authority...). 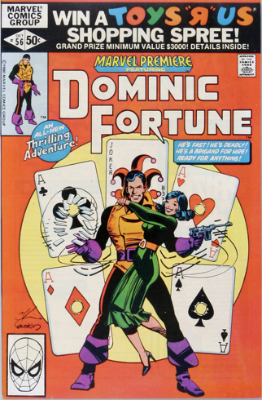 This story, a leftover from the "Dominic Fortune, Brigand for Hire" backup feature in the black and white Marvel magazine The Rampaging Hulk.

It was started by Len Wein and Howard Chaykin (the latter was the creator of the character) and later finished by David Michelinie and Terry Austin. 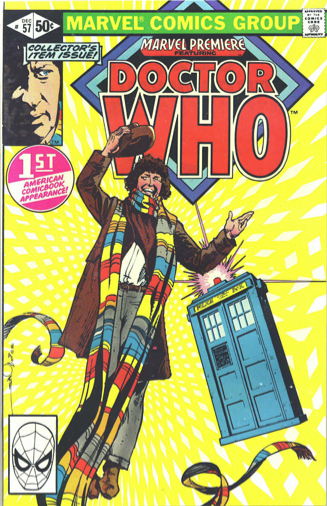 "Doctor Who and the Iron Legion"

The first issue of the Dr. Who comic in the USA features a Walt Simonson cover and interior art by Dave Gibbons, and is reprinted from the first four issues of the British Dr. Who Weekly. 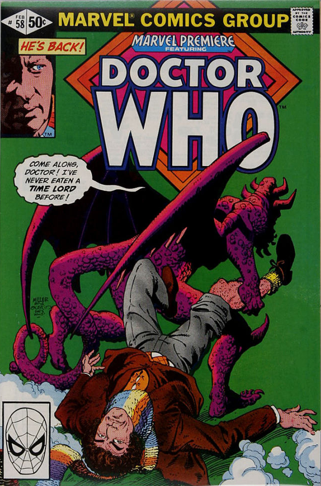 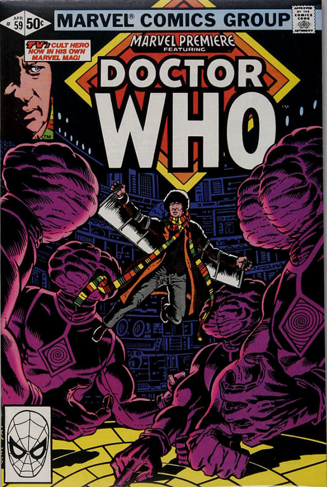 "City of the Cursed" 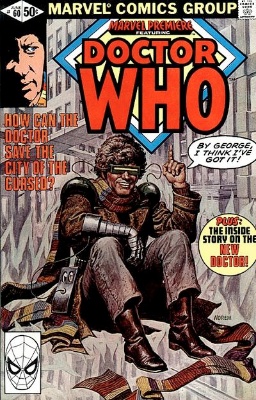 "City of the Cursed"

It was also the final appearance of Doctor Who in US comic books until the self-titled series began in 1984. 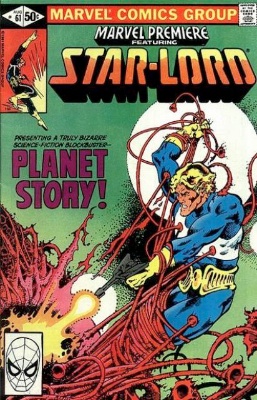 This is an early appearance (although not the first) by the character Peter Quill, aka Star-Lord, the half-alien/half-human lead character in the Guardians of the Galaxy movie.

Marvel Spotlight: Comic Book Values
Learn the prices of the other big Marvel one-off series, which launched Ghost Rider and Son of Satan.

Ghost Rider Comic Book Price Guide
Johnny Blaze burned into life in the early Bronze Age. How much are the books worth today?

Top 20 Bronze Age Comic Books
If you find one of these great issues in top condition, then you're in the money! Find out hat to look for here.