Around since the early 70s, Ghost Rider is a weird undead biker with a flaming skull and a pact with the Devil.

Always a B-star in the Marvel universe, Johnny Blaze nonetheless is the current holder of the most valuable comic book of the Bronze Age.

Click images to see current values, or send us your list for a free comic book appraisal. 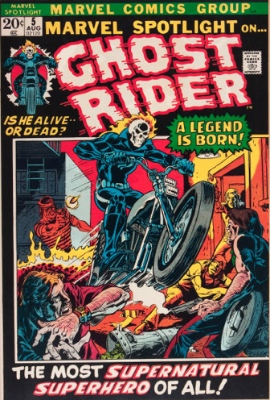 With the discussion of who created Ghost Rider dealt with, we can talk about his debut.

We begin with Marvel Spotlight #5, with Ghost Rider dealing with some killers who he'd witnessed in the act. After dispatching them with hellfire, he rides off, thinking back on how he got to this point.

Johnny Blaze was a stunt-cyclist who sold his soul to a supernatural being he thought was Satan in exchange for saving his adoptive father, Crash Simpson, also a stunt-cyclist, from cancer.

The being was not Satan, but rather Mephisto, who nonetheless made a devil’s bargain with Johnny. Mephisto cured Johnny's "father," and instead had him die in a motorcycle crash. Johnny complains, and Mephisto tries to take his soul. 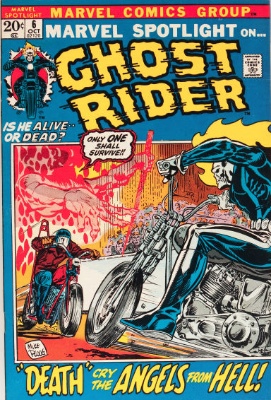 Record sale: $850
Minimum value (poor but complete): $5
Have Yours Appraised

The leader of the gang turns out to be the reincarnation (somehow, although the timing doesn't work out) of Crash Simpson, who has been sent from hell by Satan himself to claim Johnny Blaze's soul.

Ghost Rider’s adventures would continue through Marvel Spotlight #11, after which he would be succeeded, appropriately enough, by the Son of Satan.

Ghost Rider Comic #1 (September 1973): Ghost Rider Gets His Own Title 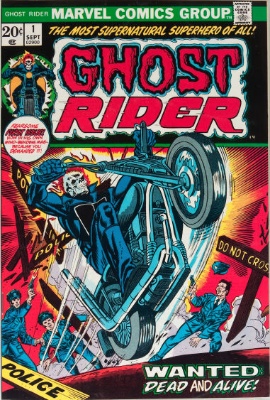 The story arc in Ghost Rider comic #1 continues from where it had left off in Marvel Spotlight #12, in which GR had guest-starred (although by then Son of Satan was the star).

Johnny’s perpetually-in-danger girlfriend Roxanne had been injured and is in the hospital. Johnny, speeding to check on her, wipes out on his cycle and ends up in the same hospital.

After some intrigue with the Witch Woman and Son of Satan, and Johnny's pal Bart attempting a canyon jump that was meant for Johnny to make (crashing and dying in the process), the police spot Ghost Rider.

Ghost Rider #1 has a fantastic cover by Gil Kane, with interior art by Tom Sutton and script by Gary Friedrich. 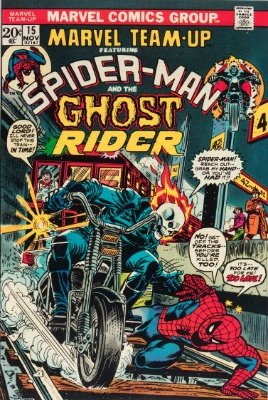 Record sale: $280
Minimum value (poor but complete): $1
Have Yours Appraised

Peter Parker takes Mary Jane to see GR's show at Madison Square Garden. Of course, trouble arises there. A gent named The Orb shows up, with his motorcycle gang. 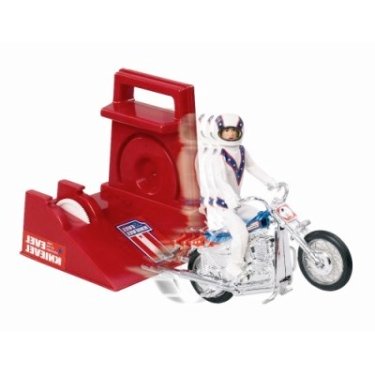 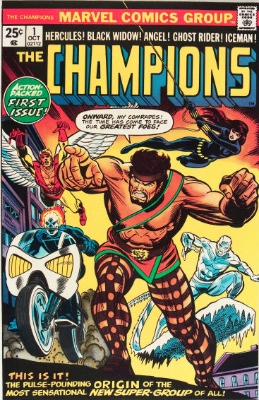 Record sale: $280
Minimum value (poor but complete): $1
Have Yours Appraised

Conceived by Tony Isabella as a vehicle for the suddenly irrelevant Iceman and Angel, The Champions were a super-team that was treated like a red-headed stepchild by Marvel Comics. Ghost Rider was lucky(?) enough to be along for the ride.

As luck would have it, Bobby 'Iceman' Drake and Warren 'Angel' Worthington were, by 1975, bored UCLA students. Simultaneously, Natasha 'Black Widow' Romanoff is applying for a UCLA teaching job (as a professor of Russian, of course).

Ghost Rider has looked better, for sure, and has had more to do than he has in this issue. For what it's worth, he wouldn't have all that much to do throughout The Champions' 17-issue run.

One of our picks as comic book investments inspired by the upcoming Black Widow movie from Marvel Studios. 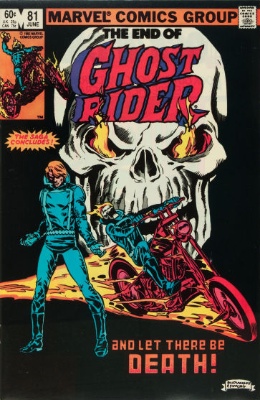 Record sale: $140
Minimum value (poor but complete): $1
Have Yours Appraised

The end of the first Ghost Rider comics run came in Ghost Rider #81, not with a bang, but a whimper. Driven by declining sales, Marvel had decided to cancel the comic, leaving his fate to the rather uninspired J.M. DeMatteis.

Johnny is freed from Zarathos' possession during a battle with Centurious. Centurious is another servant of Mephisto, and an enemy of the rebellios Zarathos. When Centurious flees from GR, Zarathos leaves Johnny's body to pursue him.

In the 21st Century, the Johnny Blaze version of Ghost Rider comic would return, first for a couple of mini-series, and then a new ongoing title that continues to the present day.

Marvel’s Ghost Rider is an odd sort of superhero. Johnny Blaze debuted in the early 1970s, in the wake of (and very much influenced by) the Peter Fonda film Easy Rider.

There could probably be no better indication that the character type of the solo, misunderstood, motorcyclist anti-hero had entered the public consciousness than to see that Marvel Comics had created a hero of that type.

Ghost Rider is odd. Have we mentioned that? Admittedly, he was not the first superhero to be a reanimated dead person, nor even the first to have been sent back to the world of the living by Satan (or at least so he thought at the time).

He was not even the first superhero to have a flaming skull for a head. But take all those things, wrap them up in a character named Johnny Blaze, dress him in black leather and put him on a motorcycle, and you've got something.

Actually, he was not even the first Marvel hero to be named Ghost Rider. That honor belongs to the 1960s Western-style hero with the alter ego Carter Slade. But since that earlier Ghost Rider had no blazing skull, no black leather, and no motorcycle, we are not interested in him.

Ghost Rider's fortunes waxed and waned, and he even ended up in a superhero team (the ill-fated Champions), but his popularity had grown to a great enough height by the 21st century to spawn two Ghost Rider movies.

Ghost Rider and Ghost Rider: Spirit of Vengeance are, to be honest, less than sparkling films. Neither did especially well with critics or American audiences, and many fans of the character in comic book form were particularly unhappy with the casting of Nicolas Cage in the title role.

While the films may not have done the character justice or been blockbusters, there has been talk of a third episode in the franchise, which would likely appear without Cage. This may or may not be a good thing. 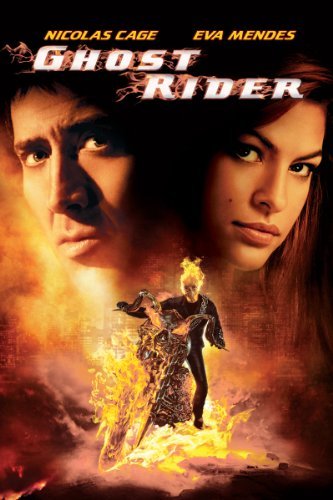 Friedrich sued Marvel in 2007 over the character, but in 2011 the suit was settled largely in Marvel's favor. Perhaps the less said about it the better. Suffice it to say that it is difficult to say exactly who created the character, so we'll go with all three men, in alphabetical order: Gary Friedrich, Mike Ploog, and Roy Thomas.

No matter who created him or how, Ghost Rider has proved to be an enduring character, with his popularity lasting far beyond the film genre that inspired his creation.

Have Your Ghost Rider Comics Valued!
If you've got some copies of Bronze Age Ghost Rider comics featuring (especially Marvel Spotlight #5 and #6, or Ghost Rider #1), then click here to have them valued FREE by Sell My Comic Books!