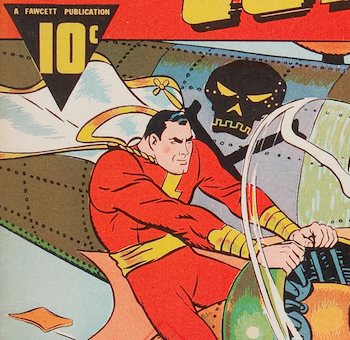 Few superheroes have had the strange and convoluted history that Cpt. Marvel, aka Shazam, aka Billy Batson, has had.

During World War II, Captain Marvel Adventures outsold Superman by a considerable margin, but things have never quite worked out for Captain Marvel to stay as a significant cultural superhero presence.

Now DC Comics has announced there will be a Shazam movie in 2019, and interest in the character has sparked again.

We present record sales and minimum values. Click on any book to see more.

The OTHER Captain Marvel! 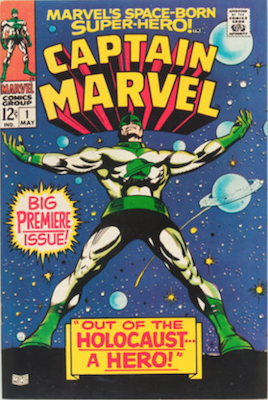 If you're looking for the 12c Captain Marvel comics by Marvel, then click here. 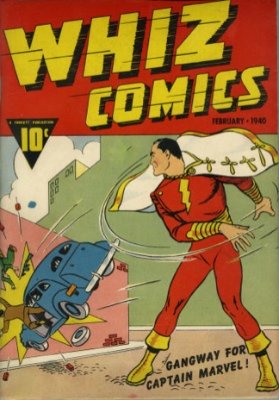 Whiz Comics #2 was the first issue to appear on the newsstands. Long story. Suffice it to say that this is really, for all intents and purposes, #1 in any sense that matters.

In the lead story, Introducing Captain Marvel, we learn how young Billy Batson, newsboy, is approached by a mysterious and shadowy figure who leads him into an abandoned subway station.

Billy follows the man onto a strange, driverless subway car that carries them both to a tremendous cavern known as the "Rock of Eternity." Billy disembarks, and the subway car and the man disappear.

Billy walks down a long passageway lined with monstrous statues depicting the evils that plague mankind, eventually finding a little old wizard with a white beard, named Shazam, who informs Billy that he has been chosen as a new champion of justice.

Copies of Whiz Comics #2 in any condition are very rare comics. There are only 49 graded by CGC, of which 27 are restored and only 22 unrestored. 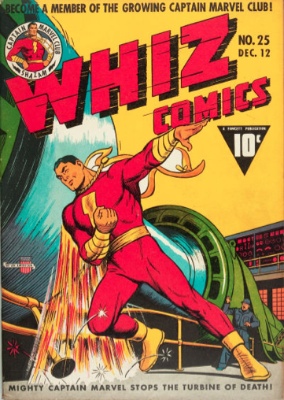 With Whiz Comics #25, Fawcett set out to create an entire family of Marvels. Cpt. Marvel's popularity was immense, and sales of Whiz were through the roof. Clearly, the iron was hot, as they say, and so Fawcett struck.

Whiz #25's lead story was called The Origin of Cap. Marvel, Jr., and was illustrated as usual by C.C. Beck, and written by Ed Herron. The story introduces a teenager named Freddy Freeman, who is critically injured by villain Captain Nazi in the course of a battle with Captain Marvel.

Cpt. Marvel, Jr., would go on to star in the Fawcett title Master Comics, and in his own title, which would both be written and drawn in a somewhat more adult, less cartoonish style than Whiz. He would also become a fixture in the Marvel Family Comics when they appeared.

This comic does not command the same price as Whiz #2, but its rarity and historical importance, combined with the generally high values for any Golden Age superhero comic in good condition, make it a nice find. 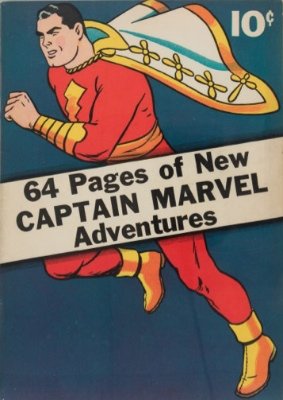 Cpt. Marvel got his own comic book in the early 40s. Cpt. Marvel Adventures #1 is a classic, simple cover.

This blue cover is hard to find in any condition, but high-grade copies are unknown. The best-known unrestored copy is only graded 5.0 out of 10 by CGC.

There is also a Wheaties giveaway promotion of this comic book that turns up from time to time. 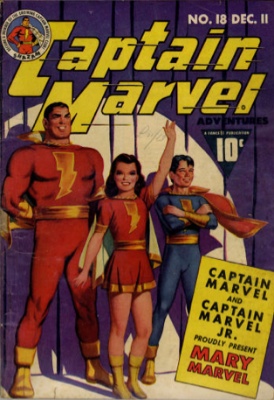 By the end of 1942, Fawcett knew they were onto a good thing, and decided to follow DC's venture into female superheroes with a female Marvel.

Based on Judy Garland's appearance by artist Marc Swayze, Mary Marvel was introduced in Captain Marvel Adventures in December of that year.

Mary Marvel was the most popular female superhero of the 1940s, and although she is largely forgotten today, her premiere appearance will sell strongly in good condition. 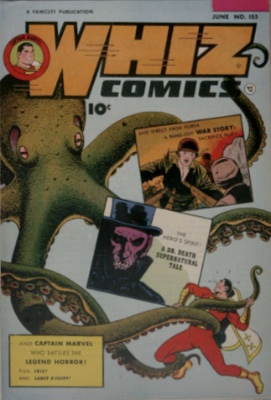 Whiz Comics #155 was the end of the line for Fawcett's comic book publishing division.

Driven by a changing market that was moving away from superhero comics into westerns and adventure stories and by ongoing litigation from DC, Fawcett packed it in with the June, 1953 issue of Whiz.

The story, titled Captain Marvel Battles the Legend Horror, does not tie up the continuity of the characters. Written by Otto Binder and illustrated by the ever-present C.C. Beck, this was a typical issue of Whiz in every way.

There isn't much that's special about it, except that it is the last appearance of Captain Marvel until 1972, when DC began licensing the Fawcett characters.

This issue is scarce, but less desirable to collectors than earlier issues simply because of its date. 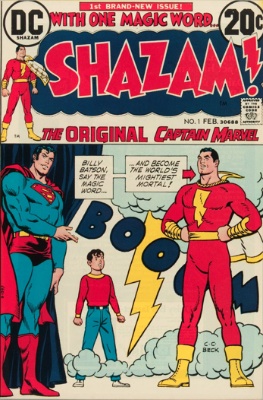 Due to legal reasons, DC brought back the Cap as Shazam!

Once rebooted, however, the Marvels would not overlap with the DC continuity exactly.

At first, they would be kept completely separate, but eventually, the world they lived on would be designated "Earth-S," and incorporated into the whole complex of Earths One, Two, Three, Prime, and sundry others.

Things would change drastically after the Crisis of 1986, and retcons aplenty would change the fates and origin stories of all the Marvels dramatically, in ways far too numerous go into here. 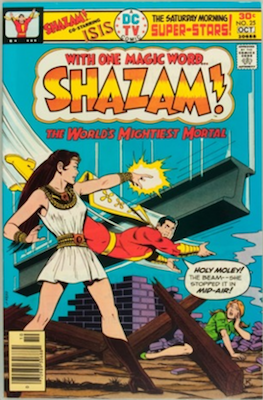 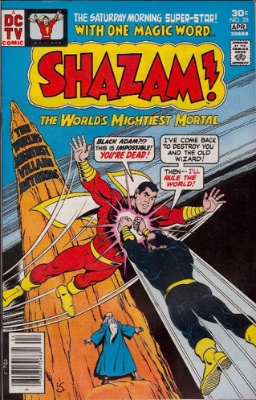 Shazam! #28: First Appearance of Black Adam since the Golden Age

History of the Comics

The character was created in 1939 by artist C.C. Beck and writer Bill Parker for Fawcett Publications' new comics division. Fawcett was known primarily at that point for a bawdy humor magazine that had started in 1919, called "Captain Billy's Whiz-Bang!"

At first, the character's name was to be "Captain Thunder," and the comic book that was to launch him was to be named "Flash Comics" or "Thrill Comics." All of those names were already copyrighted, so Fawcett named the new comic Whiz Comics, and the hero was renamed "Captain Marvelous."

Thankfully, the editors decided to shorten the character's name to "Cpt. Marvel," to save space, and also shortened the Captain's hair, to save Brylcreem. Thus was born the hero that his arch-enemy, Dr. Sivana, would almost lovingly nickname "The Big Red Cheese."

Whiz Comics #2 (there was no Whiz #1 - don't ask why, because no one knows - no one knows, either, why there were two consecutive, different issues of Whiz Comics that appeared with the #3 on them - like we said, don't ask) appeared in February of 1940, and from there, it didn't take long for Cpt. Marvel to take off. 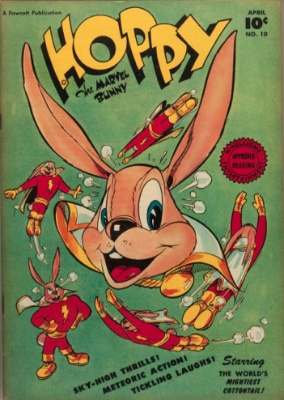 Soon, he was the most popular superhero of them all, and had an entire family of sidekicks who looked like him and had similar powers.

There was Mary Marvel, Cpt. Marvel, Jr., a group of three "Lieutenant Marvels," the non-super-powered Uncle Marvel, and even Hoppy, the Marvel Bunny.

Yes, you read that correctly.

Many more titles followed, featuring the adventures of Cpt. Marvel and the various members of the Marvel Family.

The Captain was used to help launch a comic book spin-off of the popular Captain Midnight radio show, with Marvel on the cover of issue #1.

From 1940 through 1953, Fawcett exploited the Marvel franchise for all it was worth, until changing times decreed that most superheroes were shelved in favor of Westerns and mystery comics. 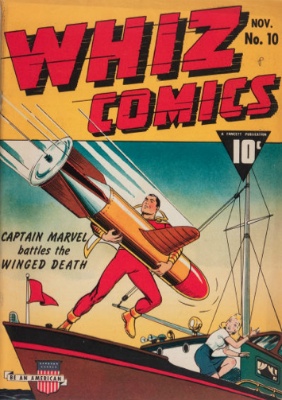 A 1941 Lawsuit by National (erstwhile DC Comics) against Fawcett claiming that Captain Marvel infringed Superman's copyright was dismissed on a technicality. Such, however, was National's anxiety over CM's popularity, that it was purportedly another lawsuit filed by DC that prompted Fawcett to finally give up the comics ghost.

Fawcett ceased publishing comics altogether in 1953, and Cpt. Marvel would not appear in print again until 1972, when DC began licensing the old Fawcett Characters.

By then, however, Marvel Comics had acquired the rights to the name "Cpt. Marvel," assigning it to Mar-vell, the Kree warrior made famous by Gene Colan in the 1960s and Jim Starlin in the 1970s.

DC Comics, at a loss, decided to start calling the old Captain Marvel "Shazam," after the magic word that transformed young Billy Batson into the Big Red Cheese. Of those comics, and of various and sundry retcons, more later.

Have Your Captain Marvel Comics Valued!

If you've got some copies of Golden Age Captain Marvel Comics, then click here to have them valued FREE by Sell My Comic Books!

Which Are the World's Rarest Comic Books?
Learn the issues which, if you ever find one, are likely to make you rich! These comics are all highly sought-after by collectors around the world.

Superman Comic Book Price Guide
A rival for early superhero comic readers, Superman eventually won the battle, with unbroken publication since the 1930s and movies, toys and other spin-offs. Find out the value of comics with Supes in here.

World's Most Valuable Comic Books
Find out the most expensive comic book sales in history, including a recent record-breaking deal for the first Wonder Woman comic!