If you have vintage Green Arrow comics, then this page will help you to identify their values on today's market.

We show record sales and minimum values for all the key books.

Have Your Green Arrow Comics Valued!
If you've got Green Arrow comic books, then click here to have them valued FREE by Sell My Comic Books! 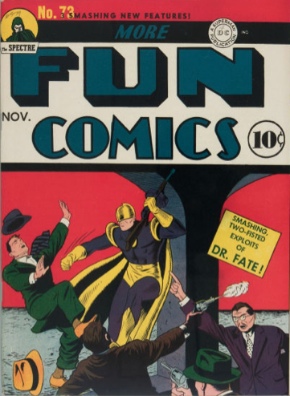 Minimum value (poor but complete): $1,200
Have Yours Appraised

This is a truly rare comic book, as there are only 28 unrestored examples in the CGC census. It's worth real money in any condition. 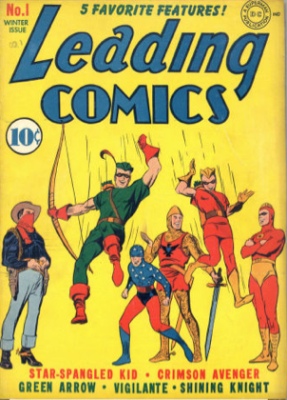 Minimum value (poor but complete): $450
Have Yours Appraised

Another rare comic (and probably under-valued), with only 30 unrestored examples in the CGC census, and seldom offered for sale.

There are only 16 unrestored examples of this book certified by CGC. 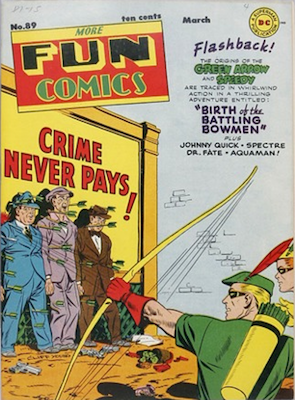 These books keep getting rarer! Only 11 unrestored examples in the census mean you might go years without seeing a copy. 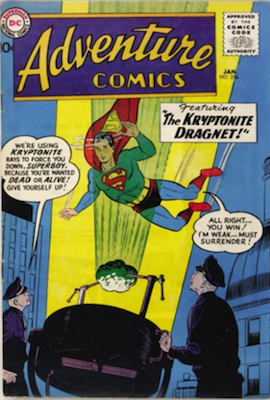 This classic retelling of the Green Arrow's origin story by Kirby is a good find, if you come across a copy in an old collection. Not super-valuable, but nice to have. 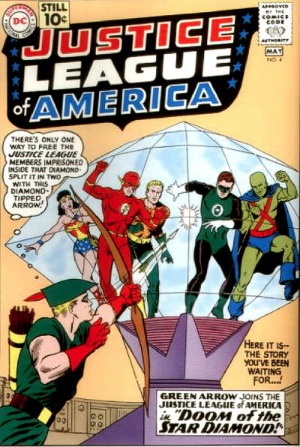 It's ridiculous to me that this Silver Age Justice League of America comic is worth more than the Golden Age appearances, but that's comics for you! 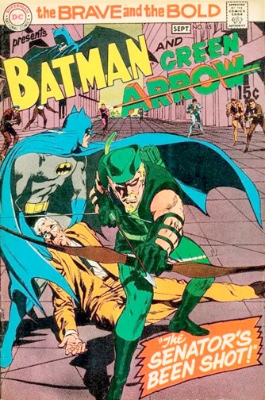 By the late '60s, Green Arrow comic books needed a makeover. He'd been a sturdy but boring character since his creation. He never had his own title in the Golden Age, but had been continuously visible as a backup feature, along with Aquaman, ever since.

Overall, the new look was far more appropriate for the late 1960s than the glumpy get-up he'd had before: hipper, darker green, and making him look far more dangerous. 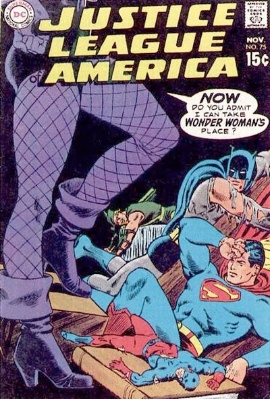 JLA #75 gives Ollie something to think about, after he loses his vast fortune.

In spite of very uninspiring art by Carmine Infantino on the cover and Dick Dillin on the inside, JLA #75 is valued by collectors as Black Canary also joins the JLA in this issue. 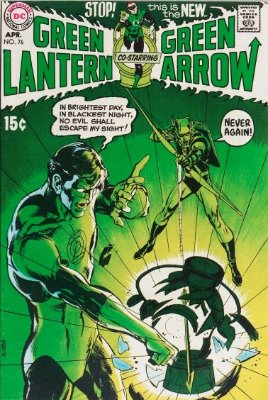 It was inevitable that in the wake of the events of 1968 and '69 in America, things would have to get more serious in comic books as well. Green Lantern/Green Arrow #76 is a great example of this change.

All the riots, assassinations, protests, and music festivals-gone-wrong were in the mind of Denny O'Neil, writer for Green Lantern comic books. It was time for changes in Green Lantern's life and in the title that bore his name.

Green Arrow comic books don't come more key than Green Lantern #76. This iconic cover has long been considered Neal Adams' best work, and is much in demand in any condition.

Yes, the arrows.  He's got arrows, all right. If you're looking for an archer with superhuman skill at hitting difficult targets, he's your man.

Armed with a simple recurve bow and a quiver filled with a variety of trick arrows (which are sometimes armed with boxing glove points, or do things like explode or give out tear gas, and  so on), Oliver Queen fights for justice, occasionally (especially in the early '70s) with a fervor that can be quite overwhelming.

Of course, it helps that Green Arrow is also in fantastic physical condition. It may seem like every superhero is "also an Olympic-level athlete," but in Ollie Queen's case, it's his wheelhouse. After all, you'd better be able to best the punks in a scrap just in case your arrows miss their mark.

In that sense, he is very similar to Batman, and large chunks of his career have paralleled Batman's in some way, although it took the wealthy Ollie losing his fortune to turn him righteous about injustice.

Green Arrow is also a master swordsman, but doesn't generally carry a sword. It just works out nicely when a sword is available and GA goes all "Errol Flynn" on some mugger's sorry posterior. Tally ho, indeed!

Green Arrow comic books had their ups and downs in the Golden, Silver, and Bronze Ages, and none of it would have seemed that it would have made him as important as he is today.

For a long time it seemed that GA was destined to be "That hero who used to be with Green Lantern, and has a backup feature in some other character's title," but Oliver Queen has become kind of a big deal in the last 20 years.

Good for him, and good for you if you have any of the collectible Golden, Silver, and early Bronze Age Green Arrow comic books, especially the Denny O'Neil/Neal Adams run of Green Lantern/Green Arrow in the early '70s, known as the "Hard Traveling Heroes" story arc, of which there is quite a bit more to be said in the following paragraphs.

The early '70s in America were a time of recognition of the grim realities that had been there underneath the gloss of the swinging, flower-power, peace and love late-'60s all along.

Like the gritty urban stories of the streets that were gaining popularity in Hollywood (in both mainstream films and the so-called "Blaxploitation" films like Shaft and Superfly), comic books began heading in the direction of more sober, serious themes, with stories that tackled social issues that comics would never have touched in the Silver Age.

Perhaps the most legendary story arc of the "Hard Traveling Heroes" era was this one, in which GA finds out that his sidekick Speedy (Roy Harper) has developed a drug habit. Roy is mainlining heroin, which is a huge surprise to both GA and GL, but was telegraphed to the reader via the iconic and classic Neal Adams cover art.

It begins when GA is wounded with one of his own arrows, shot by a crossbow-wielding junkie in an alley. He gets fixed up at the hospital, but it makes him worry about Speedy, who he hasn't seen in a month, since (hint hint) Ollie's been "strung out" with his romantic woes with the Black Canary.

In the next issue, we see GA go ballistic, taking none of the blame for ignoring Speedy and telling him to get out because "I'm not interested in you! Not anymore!" Roy leaves, dejected, and later on GL finds him,  needing a fix and in the opening stages of withdrawal, in an alley behind some garbage cans.

GL brings Roy to Black Canary's place, where he withdraws, painfully, from heroin, with help and compassion from BC.

Denny O'Neil rivals Stan Lee at his most purple here, but it was hard-hitting stuff for a Green Arrow comic book in 1971, you can bet. Neal Adams, here burdened with the workmanlike inks of Dick Giordano (who can make everything, or at least every female character around, look like it came straight from a romance comic) is not shown at his best.

But hey, it's still early '70s Neal Adams, which puts the art in these two issues of GL/GA firmly in the category of "valuable."

Value of DC Comics Characters in Green Arrow Comic Books
Learn how much GL comic characters are worth when they cross over in the DC universe.

Silver Age Flash Comic Book Value Guide
The book which began the Silver Age, Showcase #4, is just one of the valuable comics from this era!